10 Problems With Having Immigrant Parents 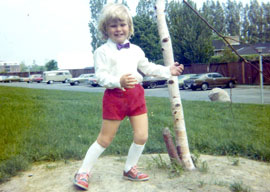 I’m a middle-class child of immigrants. I’m told we were poor when my parents emigrated from Scotland to Canada in the 70s, but I don’t remember any of that. All I remember is a bucolic childhood where I was never in want for anything I needed.

Everything I wanted, however, was another matter entirely. You see, like most middle-class children of immigrants, my parents were born and raised working class. That means they were never quite comfortable in the new world they created for themselves. It also meant problems. I didn’t have the kind of problems they had. I didn’t have to fight every day in Glasgow’s slums like my father did, and I didn’t have to make my own meals at 13 because my single parent was on vacation again, as was the case with my mother. That doesn’t mean my problems weren”t problems, though.

For example, you”re not allowed to use the front door. Unless the president is coming for dinner, everyone has to walk around to the back and take off his or her shoes there. There’s also a fancy living room nobody sits in unless front-door guests arrive, which is basically never. Here are ten more problems they created for me.

1. FOOD
Scottish people are cheap. Boomers who grew up with parents from the Great Depression are stingy. Immigrants are frugal. Put them all together and you might as well have a tattoo on your face that says, “Take care of the pennies and the pounds take care of themselves!” But you can”t get a tattoo because Scottish immigrants still think it’s the 1950s when tattooed people were uneducated and doomed to a life working on the docks.

Despite the low price of food, the meals my mother made looked like a dietitian put them together for someone dying of obesity. You”d get a third of a potato, a slice of meat, maybe a few leaves of spinach, and that’s it. My brother and I coped by pigging out on apples and ice cream for dessert and then making a ginormous bowl of popcorn. But my parents were also hungry after dinner and they”d loom over us like vultures. My father has a degree in physics and was able to somehow fit 80% of the bowl’s contents into one handful. As he pulled his hand out and balanced this Dr. Seuss-like tower of popcorn away from us, my stomach would growl, “You bastard.”

“They came here so they could work their asses off building a nest egg and have kids who didn”t think wealth was pretentious.”

2. FACE CLOTHS
Automatic dishwashers often use less water than doing the dishes by hand, unless your parents are Scottish immigrants, in which case the same Tupperware container of tepid water will do you just fine for several days. The washcloth that sat in this disgusting mess smelled like rotten garbage because it was. When my mother would wipe my face with this thing, it was like getting a facial with a used diaper. I could smell the thin layer of fermenting food for hours afterward. I still can. Today, when my kids have dirty faces, I take a silk handkerchief from the linen chest and wipe them with scented orange soap dipped in rose petals.

3. BATHS
Immigrants don”t have showers. Why let all that money go down the drain? Instead, they have baths and who goes first is based on the family hierarchy. That meant my brother and I were last, and getting clean consisted of lying in a lukewarm tub of dead skin and old pubes.

5. TOYS
I think my mom might have had a doll when she was growing up but all my dad had were these short cylindrical wood blocks his father used at the printing press to keep the newspaper rolls in place. He didn”t even know they weren”t toys until he invited a friend to play with his cool toys and his friend said, “These aren”t toys!”

When I would ask them for the awesome action figures I saw on commercials, it was like I was asking to have a chandelier installed in my room. Going to a friend’s house and seeing all his incredible Star Wars stuff was like visiting FAO Schwarz on “Everything is Free” day. Not only did they have all the figures, they had Millennium Falcons and Death Stars in which to put them. I was in awe.

They even thought the Six Million Dollar Man doll was too expensive but after a year of begging, I got his boss for Christmas. That’s right, his BOSS. Oscar Goldman was the guy who gave Steve Austin his assignments and he came with a desk and a cardboard faÃ§ade of an office. Oscar also had an exploding briefcase but that came separately so I didn”t get it.

I recently asked my mother if I ended up with Goldman because it was near Christmas and all the Six Million Dollar Men were sold out or was it because he was cheaper and she said, “I have no idea what you”re talking about.”

6. CLOTHING
Because my parents came from a world where you were either working class or upper class, they were very strict about clothing. In their mind, my brother and I were one jean jacket away from a life in the gutter. I drooled when I saw Dale Aiken’s Iron Maiden baseball hat and Donny Hickling’s Def Leppard shirt. In my teens, this lust exploded and I got into punk rock just to spite my parents. I wasn”t allowed to wear my Sex Pistols shirt to school, so I stored my punk clothes in a plastic bag in the hedges by the bus stop and would do an impromptu wardrobe change there every morning before school.

7. SLEEPING
In the daytime, my dad has an affected posh Scottish accent that sounds like Sean Connery. Things are very different at night. He talks in his sleep and his mind goes back to Glasgow’s violent slums, where his accent sounds like a cross between Groundskeeper Willie and Beelzebub. Waking him during this time is suicide as I learned in 1979 when I flashed the side table light in his face because I wanted to watch TV. (For some reason the family TV was in the bedroom, not in the living room.) In his dream, he thought going toward the light was death and someone was trying to kill him, so before I knew what was happening, a naked man had leapt out of bed, put me in a chokehold, and smashed the lamp against the wall. Uh, take it easy, guy. I”m just trying to watch CHiPS.