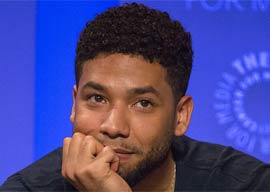 In keeping with my self-imposed rule of assuming that every media-hyped hate-crime story that barrels down the pike is “False Until Proven True,” I assumed that the grossly implausible anti-gay, anti-black, pro-Trump late-night attack in subzero Chicago temperatures involving actor and singer Jussie Smollett—which featured the added hyperbolic embellishments of bleach, a noose, and two presumably white attackers shouting “This is MAGA country” in the least-MAGA part of the country—was a steaming pile of happy horseshit.

Writing this 18 days after the alleged attack occurred at 2AM on January 29—because everyone knows that feral white rednecks roam “ritzy” Chicago neighborhoods that are predominately black and gay in the middle of a polar-vortex night with nooses and bleach in hand and are such huge fans of TV shows about gay black singers that they were immediately able to recognize Smollett, a star of Fox TV’s Empire—I have not seen a single dandelion petal’s worth of evidence that would nudge me in the direction of believing that what Smollett alleged is true. In fact, what has unfolded ever since makes me 99% convinced it has been conclusively proved to be false.

As Smollett originally related the story to police—as we shall see, his story keeps shifting—he received a threatening letter at work a week before the alleged attack. The envelope, featuring a return address of “MAGA,” contained a white powder that reputedly turned out to be Tylenol. It featured a drawing of a stick figure hanged by a noose. Anti-black and anti-gay slurs were written in cut-out magazine letters.

“The left’s True Believers swallowed every last salty-’n’-gooey drop of Smollett’s story without pausing for a second.”

As fate would have it, the attack that allegedly occurred a week later featured many elements that were in the letter. Smollett says he had flown back to Chicago late at night only to discover there was no food in his high-priced apartment, so at 2AM on January 29 he sauntered out into the brain-blistering cold and bought himself a Subway sandwich. As he returned home, two males approached him together (in a later retelling, they approached him separately) yelling, “Empire faggot nigger!” They proceeded to assault him and poured an unknown substance on him which he presumed to be bleach. He told police that he did not see in which direction they fled. (“I saw where they ran,” he later told Good Morning America. He also told GMA he bravely fought them off, that they yelled, “This is MAGA country!” as they fled, and that one of the attackers kicked him in the back—all new cherries atop his hate-crime sundae that were missing from his original account to police.)

Smollett also said that he was on the phone with his manager during the attack, which is remarkable considering that he also bravely fought with two men while speaking on the phone. However, when police requested his phone to verify the story, he refused.

He says that it was only after his attackers fled that he realized they had placed a noose around his neck. More than a half-hour after the alleged attack, he walked into his apartment building with his cell phone, still clutching the Subway sandwich which he was miraculously able to hold onto during a two-on-one beatdown, and with the rope still around his neck.

Although he didn’t outright say his attackers were white, he implied it on his Good Morning America interview:

It feels like if I had said it was a Muslim or a Mexican or someone black I feel like the doubters would have supported me a lot much more. And that says a lot about the place where we are as a country right now.

No, if he’d implied that his attackers were anyone besides white male Trump supporters, this wouldn’t even be a news story, much less the biggest one in the country for two weeks running.

Naturally, the left’s True Believers swallowed every last salty-’n’-gooey drop of Smollett’s story without pausing for a second. They not only seemed to believe it happened, they acted convinced they knew why it happened.

A soothsaying article in GQ—was titled “The Racist, Homophobic Attack on Jussie Smollett Is Far-Right America’s Endgame.” While acknowledging that the “This is MAGA country” taunt was still disputed, writer Joshua Rivera said that “its sentiment needs no fact-check.”

The fact that alleged “journalists” for high-profile magazines are willing to state that outrageous and entirely unproven stories which fall in lockstep with the narrative that’s been welded to their brains don’t require fact-checking because they feel that they are true is what actually says a lot about where we are as a country right now.

The US Senate currently has three black senators, all of whom are co-sponsoring an anti-lynching bill despite the fact that, well, lynching is already illegal and effectively ceased to occur sometime in the early 1960s. Two of these senators are running for president, and they both not only accepted Smollett’s account, they used precisely the same phrasing in their tweets supporting him.

[email protected] is one of the kindest, most gentle human beings I know. I’m praying for his quick recovery.…This was an attempted modern day lynching.

Apparently, Kamala Harris knows very few genuinely kind and gentle human beings. The following tweet is an example of what Smollett has been tweeting about Trump nonstop for years now:

Shut the hell up you bitch ass nigga. You will continue to run this country further into the ground and risk lives every time you breathe. You’re not the president. Just a dumpster full of hate. FOH. [acronym for “(Get the) fuck outta here.”] Sick to my stomach that literal shit currently represents America to the world.

I challenge anyone to take the above quote alongside the most “hateful” thing Donald Trump has ever said, run both comments through the Hate Machine I’ve graciously invented, and see who’s actually more hateful.

Sadly, it appears that all the air has leaked out of Trump’s tires. Grilled by reporters two days after the alleged attack, Trump acted as if it actually happened, calling the event “horrible…It doesn’t get worse, as far as I’m concerned.”

As most of the media was gnashing its teeth and tearing its garments asunder at a hate-crime “twofer”—hey, this victim is black AND gay!—Chicago police struggled to find evidence that anything bad at all had happened to Smollett that night.

Surveillance cameras captured Smollett walking alone around the time he said the attack occurred. Then he goes missing for about one minute and reappears, still alone, with a rope around his neck.

Cameras also captured two murky figures walking together in the same area, and they were immediately tagged as “persons of interest” despite the fact that they were caught walking away from the crime scene fifteen to thirty minutes before Smollett said it occurred.

When asked on Good Morning America about whether the two shadowy figures last Thursday were the men who assaulted him, Smollett said, “I don’t have any doubt in my mind that that’s them. Never did.”

That same day, Chicago police confirmed that the two figures in the surveillance footage were black bodybuilders from Nigeria who were close friends with Smollett. One of them had acted as an extra on Empire. Police had arrested them the day before at O’Hare Airport after they’d returned on a flight from their homeland. As fate would have it, they’d left for Nigeria only hours after the alleged attack on January 29. After grilling them for two days, police released them.

A search of their Chicago apartment last Wednesday night yielded bleach, ski masks, an Empire script, and, most intriguingly, a magazine that had been lying atop a bird cage. This is purely speculative, but why would a magazine be relevant to the case unless it had possibly been used to cut out letters for that threatening missive Smollett said he’d received?

CBS Chicago now cites unnamed sources who claim that Smollett paid the Nigerian brothers $3,500 to stage the attack, which was rehearsed days before, and promised them an additional $500 upon their return from Nigeria.

We can confirm that the information received from the individuals questioned by police earlier in the Empire case has in fact shifted the trajectory of the investigation. We’ve reached out to the Empire cast member’s attorney to request a follow-up interview.

It seems as if the investigation’s “trajectory” has shifted straight back toward Jussie Smollett. It couldn’t have happened to a nicer, kinder, gentler gay.