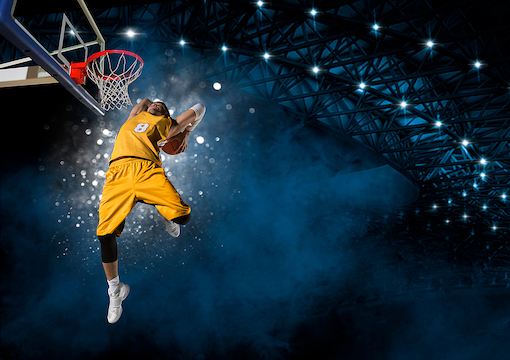 In the film Uncut Gems, there is a scene where the main character, Howard Ratner, a jeweler played by Adam Sandler, is hustling a sale from one of his regular customers, an NBA star played by the real NBA player Kevin Garnett. Ratner is demonstrating his deep knowledge of the game of basketball when the player looks at him and asks, “What is it with your people and basketball?”

Those unfamiliar with the history of basketball would not get the joke, but those who know their history would see the humor in the comment. Modern people think of basketball as a black sport, but it has always been a Jewish sport. The first professional basketball league was founded by and dominated by Jewish players from its founding in 1925 into the 1950s. The league’s best team was the Cleveland Rosenblums.

As the sport transitioned away from Jewish players in the middle of the last century, Jews continued to dominate the sport as coaches and executives. The two coaches who made the modern game were Red Holtzman and Red Auerbach. Despite the nicknames, neither man was Irish. Holtzman came from Romanian-Jews and Auerbach was from Russian-Jewish stock.

“This moral panic about anti-Semitism is really about the collapse of the old moral order.”

Today, of course, most NBA teams are either owned by a single Jewish owner or by a group of mostly Jewish investors. The front offices are dominated by Jewish executives and talent evaluators. The league’s commissioner is a guy right out of central casting. Because the NBA sets the standard for basketball at every level across the world, basketball remains a sport dominated by Jews.

On the court, however, the NBA is almost exclusively black. With a few exceptions, the best players are all black. Eighty percent of the league is black, which means there are teams with no white players. The few white players who qualify as stars are imports from abroad, where white people still play the game. In the United States, basketball is pretty much a sport for black people.

This is due in large part to the changes in the rules starting in the 1980s. The NBA was genuinely diverse into the 1980s when the best players had to have a multiplicity of skills in order to succeed in a team concept. The rules were changed to reward running and jumping, which made the best runners and jumpers into stars. Evolutionary biology took over and the sport is dominated by black players.

This Black-Jewish dynamic is the backdrop to the latest moral panic over the alleged rise in antisemitism in America. Star NBA player Kyrie Irving tweeted a link to the movie Hebrews to Negroes: Wake Up Black America. The film is based on a book written by Ronald Dalton, which makes the claim that blacks are the real Israelites and Jews are impostors who stole their identity from Africans.

Of course, this comes on the heels of the Kanye West moral panic, where West claimed that Jews run the entertainment business. The Jews who run the entertainment business quickly moved to destroy his career. The Jews who run the NBA are now doing the same to Kyrie Irving. He was forced to give half a million dollars to some Jewish people, then he was suspended. He is now in a struggle session.

It would take a heart of stone not to laugh at this. Kanye West and Kyrie Irving are flakes even by the standards of mass society. Athletes of all shades are known for saying stupid things. No one goes to an NBA game to hear these meatheads opine about the latest social issues. Entertainers are even dumber than athletes, but for some reason Jewish groups have freaked out about these transgressions.

One reason for the panic is the complicated relationship between Jews and blacks that we see in the game of basketball. Jewish people have been the great promoters of black people and black culture. Jews were largely responsible for the civil rights movement. They have championed minority privilege in the law and the culture, often as a form of retributive justice.

Despite the open-ended support for black causes, the black population of America is the one group that is openly hostile to Jewish people. This love affair between Jewish people and black people is entirely one-sided. For the most part this is overlooked, but these recent incidents involving high-profile black people is a reminder that the relationship is always on the edge of collapse.

Another reason for the panic is the fragile state of Jews in America. Excluding the ultra-orthodox, Jewish fertility hovers around one child per female. The ultra-orthodox breed like bunnies, but regular Jews have stopped making babies. Those who do reproduce often do so in mixed marriages. Jewish out-marriage is extremely high. The people we think of as Jews are slowly being erased from the book of life.

The great replacement of whites with nonwhites gets a lot of attention, but the replacement of Jews with no one gets little mention, outside of the private conversations in the right-wing Jewish community. In one of life’s great ironies, the people who benefited most from the 20th-century rise of America are the people who are slowly being erased by the culture of the Global American Empire.

Then there is the paranoia that has been a feature of Jewish identity in America since the middle of the last century. Despite facing virtually no discrimination in America, many Jews have become slowly convinced that the other 98 percent of America would gladly send them off to the camps. Ethnic paranoia has come to dominate Jewish identity, which was on full display during the Trump years.

Then there is the changing nature of America. In the 20th century, the country was close to 90 percent white. Championing blacks was a way for Jews to raise their status in a moral society without having to abandon their Jewish identity. This worked when whites had no concern for their own ethnic interests. In a majority-minority society where everyone has ethnic interests, this strategy is counterproductive.

That is what we see with the sudden rise of paranoid anti-anti-Semitism over what amounts to trivial offenses. The old moral order is coming apart. Famous blacks are questioning the old relationship to Jews, and Jews are worried that the old arrangements are coming unglued. Whites are late to the party, but there are signs that the old moral framing is failing with whites as well.

In other words, this moral panic about anti-Semitism is really about the collapse of the old moral order. The people who benefited most from the old order naturally feel this collapse more acutely than those who suffered from it. Panic is always a feature of societal collapse, so these waves of moral panic, rooted in conspiracy theories, suggest the old moral order is in serious crisis.