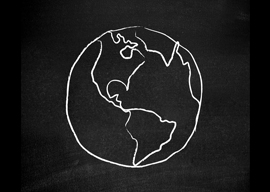 Another slide shows the following text, again written in a child’s hand:

“I think Mr. James Watsons [sic] shouldn”t have won the Nobel Prize because this man was a racist….This man said that black people don”t have the intelligences [sic] that white people do but at the end of the day who is are [sic] President? And what colour is he?

Now: James Watson”the co-parent of DNA and “perhaps the most distinguished living American scientist“””has” more “intelligences” than every teacher working at the Toronto District School Board (possibly combined).

Yet he famously resigned from the lab he”d run for 40 years after “making politically (but not scientifically) incorrect statements about African IQs.”

Those vastly superior intellects at the TDSB”besides accidentally helping to make Watson’s point for him”aren”t “gloomy” about Africa at all. Their Africentric lesson plan also features the following “math problem”:

Imagine you are an expert Kente cloth weaver in Ghana. The people of your village have asked you to make a special cloth to send as a gift to President-Elect Obama for his inauguration….How can you accomplish this important task?

Frankly, if I was an expert Kente cloth weaver in Ghana, I”d be thinking, “Hey, how come Obama’s brother still lives in a hut? Hell, why do I still live in a hut?” (Although that presumes I was still equipped with my Western white-girl IQ, right? It’s all so confusing.)

To turn this scenario into a math problem or something like it, teachers instruct children to calculate the cost of making such a gift and to “describe the length [of the finished cloth] using standard and non-standard tools,” such as whatever the hell “a Susudua” is.

(Just a reminder: An American teacher was forced to resign after assigning math homework with slavery-themed problems. But this is different. Because reasons.)

I suppose we should feel a touch of relief that Toronto’s Africentric math problems aren”t phrased in Ebonics.

This flaky curriculum is ostensibly designed to appeal to the city’s “at-risk youth,” none of whom ever seem to be Jewish or Japanese, but all of whom”at least if our newspaper’s depressingly frequent murder reports are to be believed”are “aspiring rap artists.” (Notice that they”re never “aspiring brain surgeons.”)

If that sounds “racist,” then I plead guilty, with an explanation. I can”t help myself, you see. The Toronto District School Board says so.

Included in their “Package for Educators Grades 7-12″ is an item called “Teaching about Human Rights 9/11 and Beyond,” where children are taught that white people can never experience racism. They can only ever be the racists.

It’s right there in black and white.