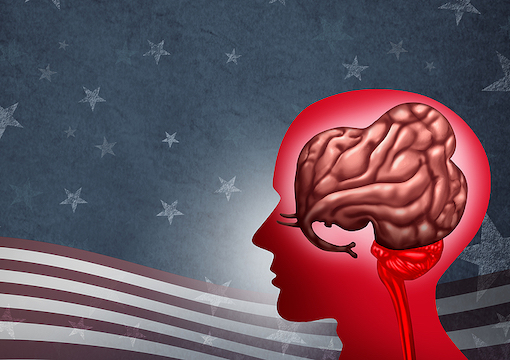 For a long time, the underlying argument against the progressive social experiment was that it could not work. Conservative Inc., of course, could never bring themselves to say it was immoral, which it is, so instead they stuck to the practical end of things. Socialism, for example, could not provide the material excess we see with capitalism. Central planning was not as efficient as the marketplace.

The fact that this approach never slowed the advance of progressivism was always held up as proof the approach was working. After every defeat, they would scurry about with their green eyeshades and clipboards assessing the damage and then come up with a plan to clean up the mess and make it work. Conservative Inc. was never the elephant in the parade. They were the guys with shovels behind the elephant.

The fact remains that the best argument against the progressive agenda is the moral argument. The left in America, unlike in Europe, has always been a moral crusade. Their interest in practical matters, like economics or democracy, is out of convenience, not sincere interest. They treat these things like a bus that they ride to the next place, then they get off that bus and onto another.

For the American left, the goal has always been to save society by saving what they imagine to be the soul of the people. From abolitionism to transgenderism, the excuse changes, but the underlying premise is the same. Salvation is communal, so society and every member in it will be judged by the soul of the worst member. Therefore, the hunt for the worst sinner in society must never end.

“There is no bargaining with the immoral and the dishonest. A genuine opposition to the American left starts from this reality.”

Interestingly, even as progressives abandoned Christianity, these impulses have remained the same. Instead of using words like “salvation” they now say “it is who we are” when justifying their latest schemes. God no longer has a starring role in their productions. Instead, avatars like science and democracy have been conjured to take the place of the supreme authority. This suggests progressivism is biological.

The thing is, though, the moralizer is always a narcissist. Her claims to morality are always a con to disguise her belief that she is the ideal moral being and that only she can guide society into salvation. Therefore, she does not see herself as a moralizer trying to impose her morality on the rest of us. Instead, she believes she is a savior, leading us out of the darkness, against our will if necessary.

This is why the moral argument is the correct response to progressivism. It targets their blind spot. That is, what they are doing is immoral and against the will of the people they claim to represent. It is one of the great ironies of life that the bane of the moralizer is to hold up a mirror to her so she can see her true nature. Even better when it is in the same frame as the damage she has wrought.

Take, for example, the Biden administration’s decision to allow men to compete with girls in athletics. As long as the man wears the appropriate frock, he can go out on the field or court with the girls. Granted, the image of a heavily muscled black man in a tutu dunking on the girls’ basketball team is amusing, but the image of the same man roughing up your daughter at field-hockey practice is horrifying.

Rand Paul, the libertarian senator from Kentucky, tiptoed around this when he questioned the nominee for education secretary, Miguel Cardona. Paul pressed him on the policy of letting men play sports against girls. He repeatedly asked if he thought it was responsible and sensible. Cardona had no answer, because even a soulless automaton like him knows there is only one answer.

Because Rand Paul is a product of what passes for the American right, he was unable to bring himself to ask the obvious question. He should have asked this man if he thought it was moral to allow men to play sports with his daughter and share a locker room with his daughter. These are easy questions that would have forced this man to defend the ideology over the welfare of his children.

This is why American conservatism was a complete failure. It is headed to the dustbin of history because, whatever their disagreements with the left over practical matters, they always conceded the moral high ground to the left. At the base level, they agreed with the morality of progressivism. Their concerns were always with the cost and efficiency of the schemes. Conservatism was the Albert Speer of progressivism.

It is a bit ironic that as Conservative Inc. withers into a depraved racket for delusional baby boomers, their alleged enemies on the left are doing what conservatives were never able to do. That is, present the cruel immorality of the left. Forcing girls to compete against men in sports is one small example. The now daily assaults on public decency and civil liberty are making clear that this is an immoral regime.

This is a critical, but necessary, evolution. One can hope to bargain with someone who is honest and moral, even if they are wildly mistaken. You can hope that the facts will set them straight. There is no bargaining with the immoral and the dishonest. A genuine opposition to the American left starts from this reality. Their opponents are not good people with bad ideas, but bad people with a monstrous moral code.