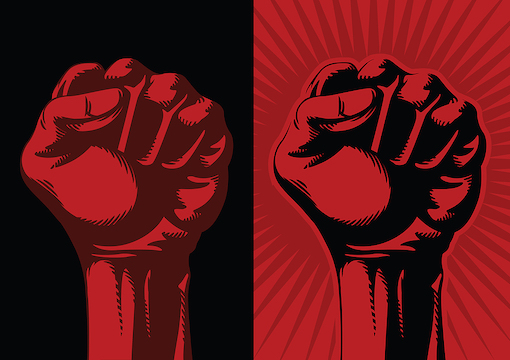 One of Nikolai Bukharin’s last known observations about the Bolshevik revolution, before Stalin had him killed, was that it was driven by a hatred of the people it was supposed to serve. The revolution was supposed to create a society in which all people enjoyed the fruits of their collective production. By the end of the 1920s, Stalin’s revolution from above promised to unleash mass murder, genocide, and famine.

In his observations of the French Revolution, Edmund Burke noted that revolutions seek to cut themselves off from history. The desire for an entirely new beginning must lead to a repudiation of the past. This divorce from the historical means they have no sense of themselves and their place in history. This is the source of their inherent instability, and why they become murderous, because there is no escaping history.

“To sadistically inflict harm on the innocent in pursuit of some dream of a future world requires a genuine loathing of the people.”

The dominant theory for why revolutions always end in a bloodbath is that the vision of the glorious future does not fit the people, so the revolutionaries decide they need a new people, which means getting rid of the old people. Those who don’t fit the new society for one reason or another are exiled or murdered. Those who can be made to conform are terrorized by the fanatics of the revolution.

Another possibility is that mass movements like revolutions attract people who are motivated by self-loathing. These are people not made miserable by society but by hatred of their place in it. The revolutionary joins the cause as a form of self-abnegation, where her detested sense of self is replaced with the identity of the cause. Despite their claims of popular support, revolutionaries tend to be intellectuals.

This was true of the Bolshevik revolution. While many came from peasant and working-class backgrounds, few of them had ever gotten their hands dirty in labor. These were men of the intellectual class. They went to university and spent their days discussing philosophy, economics, and politics. Their revolutionary furor was mostly the result of their exclusion from the political elite of Russia.

The same was true of the French Revolution. The revolutionaries were not aristocrats, in general, but some of them came from aristocratic families. The bulk were lawyers, writers, and full-time politicians. Like their Bolshevik analogs, they were products of a system they sought to destroy. They hated the system, because they hated themselves and therefore the system that produced and defined them.

This brings us to the current crisis, which is taking on the same snarling face of previous revolutions from the top. The unleashing of the Covid panic coincided with the “build back better” campaign. Build Back Better World is a global initiative launched by the G7 countries. This revolution from the top is intended to reengineer the West from the ground up. The proposed $7 trillion plan working its way through Congress is even called the “Build Back Better Plan.”

The fact that no one wants any of this is an important part of these schemes that offers an insight into the people behind them. The lack of popular support is proof that these schemes are needed. You see, the resistance is proof that the peasants and those stubbornly independent kulaks remain trapped in the old ideology. What must happen is they must be made so miserable that they are ready to abandon the old for the new.

This is right out of Marcuse and critical theory. It is what lies behind the riots targeting the white middle class. It is behind critical race theory in the schools. It is behind the crazy mandates over Covid. The point of this is to so immiserate the people so that they will accept the new social schemes, just so they can go back to having something of a normal life again. In other words, the beatings will end when morale improves.

Circling back to Bukharin’s observation about what would come to be known as Stalinism, this sort of thing is only possible when the revolutionary holds the people in contempt. To sadistically inflict harm on the innocent in pursuit of some dream of a future world requires a genuine loathing of the people. The reason they are putting masks on your kids is they hate you and they hate you because the revolution demands it.

In this age, there is another wrinkle to this that fuels their hatred. In 18th-century France and 20th-century Russia, the intellectual revolutionaries lived a comfortable life relative to the people. They did not live like the aristocrats they despised, but they did not toil in factories or on farms. There was always the tug of sympathy for the plight of the people, which is why Stalin killed those with such sympathies.

In modern America, the peasants are fat, live in comfortable homes, and spend their free time consuming mass culture. The kulaks often live better than the radicals who rule over them from their perches in the managerial state. Worse yet, the oligarchs underwriting this revolution make the aristocrats of old look like paupers. From the perspective of these Marcusean radicals, they are trapped in a world of inequity.

Like all radicals that came before them, our present-day revolutionaries are driven by a self-loathing that expresses itself as a contempt for the system. Their pretensions about building a better future are just a mask to hide the ugly truth from themselves. The only question that remains is will this revolution follow every revolution into the horror of mass murder, genocide, and destruction? History says that is the way to bet.