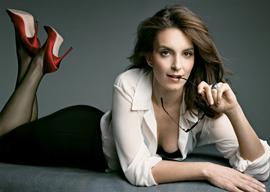 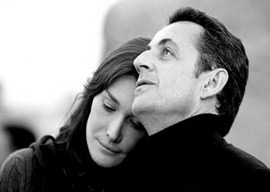 Look, even government leaders can get pissy sometimes. According to a dishy new biography of Nicolas Sarkozy, the French president was so enraged by an article calling his wife Carla Bruni a “maneater” that he threatened to smash in the editor’s face. Sarkozy also supposedly said “I”m sure you”d blow your top if I wrote that your wife was a whore that everyone had slept with and even wanted to have sex with your children.” Apparently Carla herself smoothed over the conversation, saying “Forgive him. But Nicolas is so in love, you understand. He cannot bear that people write this kind of thing about me.” Beauty trumps all. Of course.

How much is that Daphne in the window? Fashion’s quirkiest muse, Daphne Guinness, will take up a post in the windows of Barneys for an art installation honoring the Metropolitan Museum of Art Costume Institute Gala. The windows will also showcase her wardrobe in the six-week exhibition “Fashion as Art” tied to the Costume Institute Gala’s May exhibit “Alexander McQueen: Savage Beauty.”

We have a fun little fashion catfight on our hands. Christian Louboutin is suing Yves Saint Laurent for mimicking his copyrighted red-soled shoes. In a 27-page lawsuit, Louboutin alleges that reproducing his shoes”trademarked since 1992″will cause “confusion, mistake, and deception among the relevant purchasing public.” He also namedropped a few of his famous fans”Sarah Jessica Parker, and the Desperate Housewives and Gossip Girl crew among them.

After Prince William and Kate Middleton finally”finally“wed in front of the entire world on April 29, one might imagine they”ll want to relax in privacy. Instead, they”re moving in with his younger brother. The royal couple has a handful of homes to choose from, yet for a while will hang out at a suite at Clarence House in London, where Harry lives part-time when not away with the Air Corps. Nothing more romantic than newlyweds shacking up with the bachelor brother.