A Blizzard of Special Snowflakes 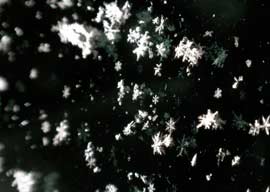 In 2014, a Muslim student who’d poked fun at the very idea of “trigger warnings” for a conservative paper at the University of Michigan found his apartment doorway vandalized with eggs and hot dogs, along with scribbled notes such as “SHUT THE FUCK UP” and “EVERYONE HATES YOU, YOU VIOLENT PRICK.”

In 2008 a white student at Purdue was found guilty of racial harassment for reading an anti-KKK book because a co-worker found the book cover’s depiction of a Klan rally to be emotionally intolerable.

And then there’s 1993’s infamous “Water buffalo incident” at the University of Pennsylvania, where a group of loud and disruptive black females went sobbing to officials after being told to keep their voices down.

Whenever I hear about such incidents, the immediate question that springs to mind is, “How easy have their lives been for them to be acting like this?”

When they equate words”especially non-threatening ones”with “violence,” which they seem to be doing with increasing fecklessness, I wonder if anyone has ever punched them square in the mouth. I know the difference between real violence and words. I”ve been on both the giving and receiving ends of literal violence throughout much of my life, including early childhood. These wilted orchids don”t seem to have a clue, or they wouldn”t conflate words and deeds.

From my vantage point, this is not the behavior of people who”ve been oppressed; these are convenient and dictatorial temper tantrums from post-pubescent infants who have been spoiled beyond all reason. Maybe they aren”t fragile at all”perchance they”re tyrants hiding behind a facade of weakness in order to acquire power and bludgeon others with it. One is tempted to really give them something to cry about.

When they are disgorged like fetal cannonballs from the warm womb of modern college life, one would hope they quickly learn the meaning of real pain and suffering. I would like nothing more than to peer out my window one day and watch all these special snowflakes melt the moment they hit the ground.