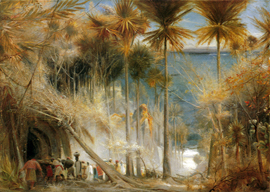 Ali Baba and the Forty Thieves by Albert Goodwin

Here’s the scoop on poor old Hellas, that sad little EU country given a temporary reprieve from being hauled to the municipal dump: Greece will default sometime in 2012. If there are any doubters around, this prediction comes from the great oracle of economics Taki, the very same Taki who smelled a rat even before the Greek government was caught red-handed cooking the books under the advice of the poisonous giant squid, Goldman Sachs. The latter took its giant fee and went back home in order to continue screwing the innocent. The Greeks stayed on the beach and are now paying for past follies.

The trouble is that no one responsible for the disaster has been punished. An ex-minister of defense under the socialist government of ten years ago, one Akis Tsohatsopoulos, was said to have 180 million Euros in his private bank account. The bum had no family money except his ministerial salary. The newspapers screamed bloody murder to no avail. He threatened to reveal the truth about defense-contract kickbacks, so the “conservatives” clammed up. The result was a typical Hellenic fiasco. He kept the money and everyone went to the beach.

“The only Greeks whose hands are clean are that tiny minority who keep government away from their businesses.”

How can anyone take these Greek politicians seriously? Constantine Karamanlis, dead for years, called the military junta crooks, but Taki knew better when he sent food packages to the wives of the coup leaders while their husbands rotted in jail. Karamanlis oversaw the first period of corruption when he talked Greece into the EU back in the early 80s. Andreas Papandreou, father of the present Greek premier, was known as Ali Baba because he and his forty ministers turned lying and stealing into a Greek art form, a far more profitable endeavor than building useless edifices such as the Parthenon. Another Karamanlis, a nephew, fired a metaphorical coup de gr”ce into the economy when for five years he sat on his very fat ass and watched the public sector steal whatever was worth stealing.