A Farewell to Bunky 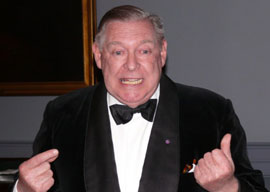 Priscilla became Mrs. Ulmann and presided over a grand townhouse in the Upper East Side. That’s just about when yours truly met Eddie, probably during the tennis tournament in Southampton when I was still on the tennis circuit. Eddie was deceptive because he neither walked nor ran like an athlete, but he sure had great hand-eye coordination. On the tennis court he dressed like Bill Tilden, but unlike Big Bill, Eddie had an eye for the ladies. He would sigh and remark about a lady’s protuberances on the beach without ever using foul language.

Eddie reached the highest level in the game of racquets, where he won nine national amateur racquets doubles championships with Willie Surtees and Willie Boone. He also won myriad club championships in racquets, but I could always get a rise out of him when I asked how many people in the world played racquets as compared to the sports in which I compete. But where Eddie really excelled, actually to my horror, was in his Anglophilia. Mind you, he revered the British classical system of education that is now almost nonexistent in America, and he really knew his stuff. It used to drive him crazy when I”d tell him that Napoleon could have wiped the floor with Wellington if BlÃ¼cher hadn”t come in late in the afternoon on June 18th, 1815. He was so childlike he would quote from a book in which a lady who had been the mistress of both men had said, “Le Duc Ã©tait de loin le plus fort. (The Duke is by far the strongest.)”

It was this childlike attitude at times that endeared Eddie to me. Having gone to Exeter and Columbia, he would snort about me having gone to Lawrenceville, Blair, and Virginia. Staying with him in Southampton one year I swore never again because of two broken-down Englishmen who were also staying”living off him, actually”who got on my nerves as only freeloading pseudo-toff Englishmen can. Eddie in his cups once told me he descended from Ulmann the Latvian tyrant who used to disembowel his enemies. I mentioned it in my London Spectator column and he was delighted. “I hope no one in White’s reads it,” he said, laughing. “Everyone in White’s reads The Spectator,” I told him. “In fact it’s the only thing they read except for the racing form.”

Eddie’s illness was a terrible one but as expected of his kind, he bore it like a man, if one can still use this term without some hairy feminist throwing a bomb. His wife Priscilla was a true heroine, leaving her job to take care of him, and although money was tight at the end, none of his friends heard a peep of complaint. Eddie was articulate, witty, erudite, and very knowledgeable, especially in history and literature. One of my life’s great pleasures was having breakfast with him and Dickie Mortimer in Southampton, Eddie driving Dickie”who has had a classical education”crazy by trying to catch him on some obscure poetry or a historical nonfact.

Goodbye Eddie, and as we Greeks say, let the earth that covers you be soft.