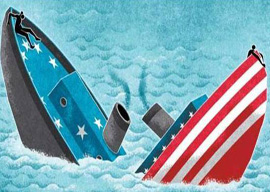 Pat Buchanan may be the only self-described paleoconservative whose last six books have reached The New York Times Best Seller list. Pat did this despite the established conservative movement’s slanders and the Murdoch media empire’s inattention. His books have come out with topline commercial presses while bearing such grim titles as Day of Reckoning, Death of the West, and Suicide of a Superpower, which is subtitled Will America Survive to 2025?

His laments for a fatally misled civilization feature themes that recur in all of Pat’s books: the demographic sub-replacement level that educated Americans and indigenous Europeans of child-bearing age have reached, the growing chasm between senior citizens and those in the work force, the disruptive effect of continuing Third World immigration, the anti-Christian, anti-bourgeois character of Western governments’ multicultural policies, and the dangers of neoconservative attempts to impose our present model of American democracy globally.

Pat raises questions about whom the Republican Party is crawling after in defiance of electoral reality:

In 2008, black and Jewish voters each gave McCain just one percent of his vote. Why then the GOP obsession with African American voters who went 24-1 for Obama, but are outnumbered by white voters 6-1? Why does the GOP spend so much time courting Jewish voters, who are outnumbered by Catholic voters 13-1 and by Protestant voters 25-1?

“The white Christian population cannot understand that its fixation on openness and sensitivity is a form of madness.”

One might contend that Jewish support for the GOP has brought some funding and PR benefits because of Jewish wealth and Jewish media influence. Unfortunately most of what the GOP gets from this cajolery is far less than what goes to the Dems.

The GOP’s desperate quest for black votes has been even less profitable. It’s involved groveling before a group that despises the Republican Party no matter what that party has done for blacks in the past and no matter how often it laments its fictitious racist sins and calls for stomping on Confederate memorabilia. Its policy toward Hispanics has been even more self-destructive. Pat suggests the only sensible course here is limiting immigration and sending back our swarm of illegals. That is a win-win policy to the extent that it would enjoy the approval of an American work force suffering from depressed wages and satisfy the conservatives in the GOP base. It would also restrict the number of future voters who would keep the GOP from winning national and state elections.

It would be hard for me to pretend to be totally neutral in reviewing Suicide of a Superpower. Pat has been a friend of mine for many decades. The inscribed copy of the book he sent acknowledges my “faithful support” and less credibly, my achievement “in holding the Old Right together.”

In the interest of fairness, I have some criticisms. About thirty pages of Suicide of a Superpower are devoted to ethnonationalism and its impact on contemporary politics. Supposedly ethnic loyalties and ethnic frictions are fundamental to understanding today’s world.