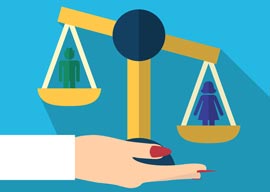 Professor Hunt’s wife, herself a distinguished professor of immunology, came at once to his defense and said that he was no sexist. I mean her no disrespect”on the contrary, her defense of her husband does her honor”but what she said was irrelevant to the situation and indeed in a way granted the premises of the witch-hunters. For supposing that instead of being not a sexist he had been a domineering womanizer, it would still not have justified the demand for his resignation from his chair. It is an intrinsically totalitarian demand that a cell biologist, in order to be able to work at all, should subscribe to the current political orthodoxy, whether it be right or wrong. It is not so much ironic as constitutive of these times in which diversity is claimed as the highest good that there should exist a demand that everyone should think alike or at least not utter heresies in public.

The ultimate aim, of course, is that of Newspeak as described in Nineteen Eighty-Four: that certain things should not only be unsayable but unthinkable. No doubt those who formed the lynch mob that forced Professor Hunt’s resignation (thanks to the terminal pusillanimity of the university administration) would not much care for a parallel with the Kouachi brothers, who carried out the attack on Charlie Hebdo, and it is true that they did not actually kill the professor; but their desire to ensure that certain things not be said was the same as the murderers’, and their method of fulfilling their desire differed from that of the Kouachi brothers mainly in the sophistication of the means employed.

If I did not suffer from a residual aspiration to be minimally consistent, I should say that those who hounded Professor Hunt should be severely punished, for example by being forced to resign from whatever miserable jobs they do.