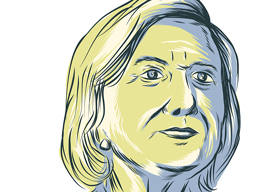 Donald Trump threatened to kill Hillary Clinton last Tuesday. The Secret Service came to visit him and he’s looking at five years in prison. It’s all conjecture, of course, but that passes for cold, hard evidence this election and that’s because the whole thing is rigged. The media is completely in the tank for Hillary and they neither see, nor hear, nor speak of Hillary’s evil. Hey, guys, if you”re looking for murders, check out anyone who has ever crossed the Clintons. There are about 100 cases where some intern has slept with Bill or some lawyer knew too much or some investigator got too close and boom“he shoots himself in the back of the head at the top of a mountain at four in the morning.

The media cared about the sheer number of cases when 57 women said Bill Cosby raped them. If we brought the Hillary kill list down to 57, you”d be dealing with only the really, really spooky ones. Like the one last month where a DNC staffer, who may very well have supplied Julian Assange with the classified emails that brought massive embarrassment to the party, was shot in the back of the head in the middle of the night.

Seth Rich was talking to his girlfriend on the phone when a gunman came up behind him, shot him to death, and left without taking anything at all. Rich was in a nice neighborhood that I”m told hadn”t had a murder in six years. The Assange link got eye rolls from the left until he personally offered a $20K reward for any information leading to an arrest. A Dutch TV host pressed Julian on this and asked if it was a murder accusation directed at Hillary and the subject quickly died.

The list of victims goes on and on and on, and Google is happy to tell you how serious the accusations are and how tenuous the link is. You”ll likely come across left-wing bias where they pooh-pooh the link, but peel back another layer and it’s only a fraction of a percent less scary than you thought.

Take the case of John Ashe, who was choked by his own barbells in June. The U.N. official was on trial for taking bribes from Chinese billionaire David Ng, a.k.a. Ng Lap Seng. Snopes wants you to know it’s a myth that it had anything to do with Hillary and even my buddy Steve Crowder claims, “He wasn”t going to be testifying against Hillary at any time.” The NY Post disagrees and claims that “the prosecutors would have linked Ashe to the Clinton bagman Ng.” This seems likely as an ABC News story from last year reported on Ng’s multiple visits with the Clintons in 1997 when he was photographed having meetings with them. So Ashe is looking at prison time for dealing with a corrupt billionaire who has a history with Hillary Clinton. He could likely negotiate a leaner sentence if he had some information to impart, but he wouldn”t be able to impart it if his windpipe were crushed by a barbell (who the hell gets killed by their own barbell?).

Cases such as Ashe’s have become routine for the Clintons, but they weren”t back when he was running for president in 1992. The incredibly sexy Paula Grober was Bill’s interpreter for the deaf back then and she worked with him for about fifteen years. It’s been reported she had told a friend about Bill’s advances and she promptly died in a car accident wherein she was hurled 33 feet through the air. Nobody saw the accident and it happened when she was alone, driving in the dark, with no other cars around.

Again, if we”re allowed to employ conjecture, I think this is when Hillary got a taste for murder. She likely wasn”t directly involved. If she were, there would have probably been more deaths before Bill was president. All I could find before 1993 was her giggling at a child molester for getting off.

However, now that her husband was president, she had the power to do more than giggle at crimes. She had the power to commit her own. I”d imagine it quickly became relatively painless and after a few sleepless nights, one gets over such things. She could have been like Martin Landau in Crimes and Misdemeanors after he had his mistress Anjelica Huston killed. “Once in a while there’s a bad moment,” he laments of the guilt, “but with time, it all fades.”

When Whitewater exploded, it became very bad for everyone involved, and that list included Vince Foster and the Clintons. Bill Clinton was being accused of forcing a loan to a woman named Susan McDougal, who facilitated a crummy real estate deal they were involved in. Luckily, Vince shot himself in the mouth before he could drag her down. Though many scoff at the idea he was killed, it is a fact that the Clintons immediately raided his office for incriminating documents.

The anti-conspiracy argument then becomes: They may be corrupt criminals who nabbed incriminating evidence from a guy who just committed suicide, but they had nothing to do with killing the guy who could have made that evidence public. Jon Parnell Walker was an investigator on the case who might have told us more, but he jumped from his apartment balcony to his death. Susan’s husband, Jim, was in jail and also had plenty to say. Fortunately for the Clintons, he died mysteriously of a heart attack while in solitary confinement. Susan refused to speak about the case after that and served 18 months for contempt. When she got out, Bill Clinton pardoned her. This seems to be the safest route to take when involved with a Clinton scandal.

In 1997, while Clinton and his erection were still running the White House, an attractive pregnant woman named Suzanne Coleman committed suicide. This isn”t unusual in and of itself, but people started asking questions when it was discovered she apparently shot herself in the back of the head and had an affair with Bill Clinton when he was attorney general in Arkansas. Was she pregnant with his child? We”ll never know.

Back in 1994, Paula Jones had filed a lawsuit against Bill Clinton and had immediately become too famous to kill. Monica Lewinsky wasn”t. Why wasn”t she killed? “I say today and I will continue to say that I believe Monica Lewinsky is alive today because of choices I made and action I took,” Linda Tripp told Aaron Klein earlier this year. She believes her recorded conversations with Monica left too much evidence for the chunky mistress to be taken out.