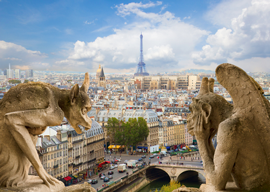 I”m still not sure why half of the French press members who still have enough couilles left to stand up for their national sovereignty and culture seem to be old Jewish book nerds.

It might be because your friendly neighborhood anti-assimilationist Muslims pose more of a physical danger to Jews than they do to other Frenchmen, pushing them over a threshold beyond which PC ostracism is less costly than silence”or maybe it’s a tradition of rationality. In any case, bless these codgers, because they”re giving “em heck.

For example, the left-wing media had yet to tire of howling at Alain Finkielkraut this fall when they had to turn around and face the popular success of Ãric Zemmour’s new book, Le Suicide FranÃ§ais, a year-by-year account of how the French elite have spent the past four decades selling out their countrymen to the globalization juggernaut, using multiculturalism to guilt them out of protesting.

As the infotainment avatars of said elite, the shouting heads on the TV talk programs at Canal Plus have led the charge in trying to caricature the old fart into submission. (Zemmour has notoriously nicknamed Canal Plus the “bobo channel”; he used to work there, but intimacy with the hypocrisy of the moneyed leftist press can breed a headache-inducing level of contempt.)

They can”t ignore him: Suicide has been selling up to 5,000 copies a day. The commoners who are buying it clearly need to be told how wrongheaded they are. So most of Zemmour’s interlocutors in the media”through a combination of leading questions and shouting over him when he tries to answer”do their best to reduce the book’s 544 pages of history and analysis to a handful of disjointed heresies.

Zemmour picks on our poor peaceful Islamist brothers, goes the litany; he thinks patriarchy wasn”t useless to the construction and defense of the nation; and, unspeakable for a French Jew, he dares to entertain the hypothesis that the Vichy government may have surreptitiously saved some of his coreligionists. Every detail of the accepted Holocaust story is now safely carved in stone for leftists, and to rationally examine a word of it means you heart Hitler, so watching people struggle to stop themselves from yelling “anti-Semite!” at Zemmour is horribly funny.

Walking hairstyle Aymeric Caron, who now holds Zemmour’s old gig at Canal, led the pack in accusing him of being obsessed with immigration. But before Suicide even gets to Vichy or immigration, Zemmour has already had at a fair number of targets, some of which were fair game for French leftists as little as a decade ago: Nixon’s abandonment of the gold standard; France’s loss of patria potestas; damaging attempts through various ideologies to rationalize the French defeat by Germany in 1940, including blaming it on the gays; the increase of judicial veto power over the legislature; and Americanization (whereby the French are coerced into accepting parts of American culture that even Americans can”t stand anymore: billboards everywhere, horrible food, losing your job to big-box stores, and Kennedys).

If traditional leftists were to tough it out through the Vichy stuff and read Zemmour’s attack on the replacement of small farmers and small grocers by their large-scale betters, they might find themselves perilously close to agreement. But the modern bobos seem to think Jacques Shmoe’s job-security worries are just another intersectionality of his unfashionable racism.

The Swiss at Infrarouge, more civil than Caron and co., at least gave Zemmour a chance to explain his ideas about immigration, even if they didn”t make a terribly honest effort at reading his book. After they accused him of hating all immigration ever, they gave Zemmour”the son of a paramedic and a housewife”enough time to remind them that he can read, and that he knows that France is the “oldest nation of immigrants in Europe.” France’s longstanding tradition is to accept and assimilate families such as his, which worked like a charm back in the days when newcomers were few enough, and came from a great enough variety of countries, for them to be absorbed into the French mainstream with little to-do.

But since the 1970s, the state has allowed large masses of newcomers”many of whom come from a related group of nations”to come in without daring to ask them to assimilate. Pressure of numbers has allowed them to effectively colonize neighborhoods and entire towns and suburbs, imposing their language, customs, and morals on whatever remains of the native population. They then ask assimilated immigrants like Zemmour what right he has to ask them to do as he did.

Does this sound familiar to anybody Stateside yet?

Zemmour isn”t defending anything less sane than the right of sovereign nations to control their own borders: the right of peoples to say no to large numbers of foreigners who do not want to join them, but rather to replace them.