A Man’s Place and a Woman’s Role 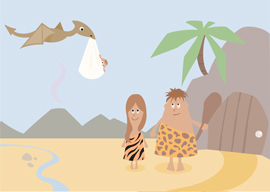 Men and women alternate reading the kids stories and putting them to bed. A woman kisses the children good night every night and a man provides his children with a “force field” that protects them from monsters and bad dreams. This is done by waving his hands over their bodies and making a sound that resembles a lightsaber.

When everything is taken care of and the house is quiet, it’s the man who initiates intercourse. A woman usually obliges. If a woman does no cooking or cleaning whatsoever and is not employed, she obliges 100% of the time. Similarly, if it’s the man who cooks the meals, he gets sex whenever he wants. If a woman is conservative in some duties, she should be liberal in others. To the non-married much of this talk will sound like rape. There is no such thing in marriage. It’s more like if your sibling was a vampire. If things got really bad, you”d cut yourself so he could eat.

A man never refuses any kind of intercourse in any capacity whatsoever.

A woman gets a babysitter and initiates date night, unless it has been over two months since the couple went out, at which point the man must step in and arrange a babysitter.

A man buys the Christmas tree, brings it home, and mounts it. He puts the angel on the top but the woman and children decorate the rest of the tree.

A woman tries to stay relatively slim and attractive. Men would do the same if women cared. Men prefer a woman to wear high heels and maintain long hair, but once a woman has borne a man children, everything else is gravy and he has few demands.

Women cry when they hurt themselves. Men swear. Both men and women cry at movies, but women cry when romance goes awry and men cry when the downtrodden band together to overcome adversity (this includes the Christmas spirit scene in Elf and the end of School of Rock).

When there is a bump in the night, a man grabs his baseball bat and goes to investigate, even if he is nude. When a child bumps his head, a woman makes him feel better. A man decides which accidents mean we have to go to the hospital.

A woman chooses the doctor and makes sure the children get their shots and regular checkups. A man handles his own medical affairs.

A woman organizes the birthday parties. A man cleans them up by putting everything in a heavy-duty contractor bag. Men don”t recycle.