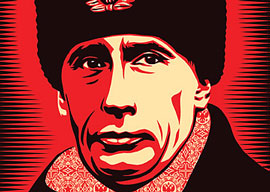 All this puts professional movement conservatism in precisely the same camp as Hillary Clinton, who recently went there, declaring that Putin is a Hitler.

Which brings us to the next important bullet point in this drunken takedown of Conservatism, Inc.: Vladimir Putin is arguably the only conservative leader of any import in the world. He’s leading Russia in building a country on national identity, Orthodox values, and the dreaded authoritarianism, which basically means there’s someone around who’s powerful enough to bully billionaires. No less an authority than our own Pat Buchanan has asked “Is Putin One Of Us?“

But hey, when has anyone ever listened to the wise old man of paleoconservatism?

Instead, we have a mob of echo-chamber “conservatives” looking to revive the Cold War, people who fail to understand that at this moment, it’s far better to have a coward in the White House scared of his own shadow than a cowboy itching for a fight to prove that he has the biggest pair of clankers on the block.

I don”t count myself among Putin’s American fan base. I do, however, think that the Vladimir Putin Fan Club has a lot more in the way of intellectual honesty and internal consistency than the opportunistic weasels denouncing the John Doe Currently Known as Barack Obama for not running willy-nilly into a fight that Americans don”t want.

Forgive me, but if there were ever a moment that I was glad we have a confrontation-avoidant, mom-jean-wearing wimp in the White House, it’s right now. I just moved to a new house. I really like it and I don”t want to see it incinerated because Russia decided to ham-fistedly protect Russians.

The establishment right is busy with its usual incitements to the yokelry with little regard for truth and no game plan longer than their next book tour. If only we could get them to take such a principled and strident stand against the very real leftists destroying civilization here in the United States. Instead, they gather at CPAC to bicker about which concessions to the left are most likely to yield the hollow victory of electoral triumph.

If we are indeed in a new Cold War, I for one welcome our new Russian masters.