A Portrait of Noam Chomsky: A Great Mind in a Weak Soul 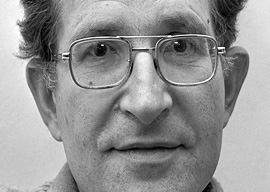 Why not? I am not concerned with Yancy; in Chomsky’s case, the ultimate reason, I think, is that he is a weak man. Raised by and among left-wing Jewish academics, Chomsky has often told the story of how, as a young man, he witnessed another youngster being bullied. Ever since, he has been on the side of the weak. Although that may be an admirable disposition, it should not prevent one from having clear-eyed perceptions (Chomsky’s great error); in particular, in politics, where the stakes are grave, unlike in academic work on linguistics. Early influenced by anarchist thought, Chomsky has remained on the far left since he was a teenager, a fact that in itself casts suspicion on him. About the time that a man gets his driver’s license, Chomsky already had politics all figured out, and he has not felt compelled to alter his views since. Consider that in more than seven decades, experience has not prompted Chomsky to rethink his leftism. Is it not, then, a fair question whether he has ever been sufficiently disinterested about politics to begin with? I would submit that as a young man Chomsky found an approach that met his own personal needs, and henceforth reality was interpreted accordingly.

When a man as intelligent and erudite as Chomsky constantly insists on such a warped, abasing idea of his own country, it may well be that something pathological is at work. It seems clear that, like most people in our time—intellectuals above all—Chomsky, for all his brilliance, lacks the strength of character one needs to see things as they are. The tragic cast of mind is not his. His is a great mind in a weak soul; a high-powered engine with a driver who’s afraid to hit the gas. Therefore he provides easy, simplifying criticism from a sentimental point of view. He runs from reality and takes refuge in delusion. And now listen, he means to set you straight, this little man. Save the environment, he urges, though his actual problem is himself.

In his younger days Chomsky spoke in that nasal voice that most intellectual men now display. For several decades his delivery has been soporifically flat, and at 88 he seems more and more like an old lady, though without the inner liveliness that old Jewish women often show. In his manner he has always conveyed a lack of healthy male vitality, like virtually every man on MSNBC and CNN, to say nothing of those uniquely pitiable men in academia. Such a man, though he can work up an ingenious argument that sees the U.S. as to blame for virtually everything, is far less valuable to the state than are the uneducated, coarse men who needn’t turn away from the world as it is, and who are in fact quite willing to risk their lives for their country: a sacrifice one can hardly imagine Chomsky the critic making, even if, per impossible, his beloved “democratic socialism” were on the line.

After the U.S. Chomsky is most critical of Israel, and perhaps on some level he suffers from a kind of displaced Jewish self-loathing, although there may be a fearsome underlying pride in it: Instead of hating himself, Chomsky the great genius needs to be an unrelenting critic of his country and people, indeed a kind of God-like figure: “You are in error, as you now learn from me.” That, after all, has been Chomsky’s campaign in politics and linguistics alike from the beginning to the present.