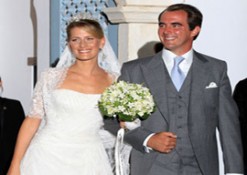 Forget Chelsea Clinton. The most glamorous wedding of the year was between Prince Nikolaos of Greece and Tatiana Blatnik which took place this week on the Greek island of Spetses. The bride, an events planner for Diane von Furstenberg’s label in London, arrived in a horse-drawn carriage wearing a stunning gown by Angel Sanchez. Among the royal attendees were Princess Letizia and Prince Felipe, Princess Mary of Denmark, and newlyweds Crown Princess Victoria and Prince Daniel. Queen Sofia of Spain, the sister of Nikolaos’s father, Constantine II, also attended the traditional Greek Orthodox nuptials.

As one marriage begins, another ends: Tiger Woods and Elin Nordegren were officially divorced this week, and the Swedish stunner celebrated by giving her first official interview to People. “I feel stronger than I ever have,” she said. “I have confidence in my beliefs, my decisions, and myself.” She reportedly received $100 million to $500 million from the settlement. At a golf tournament this week, Tiger spoke out about the divorce: “It was a lot more difficult than I was letting on.” Don’t think he’s going to take a break and mope. “This is my job,” he said. “This is what I do.”

Meanwhile, Levi Johnston and Bristol Palin are butting heads again. After their two-minute reunion, Levi is saying he’s never going back, and the only thing he regrets is apologizing to Sarah Palin and her family, “‘Cause it kind of makes me sound like a liar. And I’ve never lied about anything.” He says he backtracked only to make Bristol happy. He’s running for mayor of Wasilla with a big splashy reality show documenting the whole thing. Bristol, however, is aiming a little higher: she’s reportedly been cast on the next season of Dancing with the Stars. One question: who’s watching their kid?

The Emmys air this Sunday and all anyone wants to know is—how low with Coco go? His version of the Tonight Show got an Emmy nom, but should Conan O’Brien win, his acceptance speech will be shackled by a non-disparagement agreement, which unfortunately ends only three days after the Emmys air. (After that, anything and anyone—including the much-loathed Jeff Zucker—is fair game.) But there could be one loophole—he’s only restricted from saying anything that’s “false”—and given the high drama that surrounded his acrimonious split from NBC, there’s plenty of truth he could work with. Everyone’s praying for a win to give the usually long ceremony a bit of drama.

Oh, look! Tinsley Mortimer is coming to a Barnes & Noble near you. The socialite has signed a deal with Simon & Schuster to write a novel. Expect plenty of the material to come from her juicy personal life. After High Society was canceled, it’s good to see another opportunity come her way.

After a month of prison and rehab, Lindsay Lohan is back on the streets and actually behaving herself. The 24-year-old, who’s seemingly lived a thousand lives already, jumped back on Twitter immediately after her release from UCLA’s Neuropsychiatric Hospital earlier this week, blasting the photographers hounding her. She’s reportedly throwing her energy into getting her career back on track.

Will Forte‘s been one of Saturday Night Live‘s go-to funny guys since he arrived in 2002, but now he’s quitting the late-night show. Most recently famous for MacGruber (which flopped at the box office), Forte is leaving to pursue new opportunities.

Huffington Post had better watch out because John Mayer is mad as hell. The website posted a rumor that the crooner had rekindled his romance with Jennifer Aniston, forcing Mayer to publish a scathing response to the “Internet Death Star” on his Tumblr. “This is reporting? How do you pay your writers now, in Silly Bandz? Do you meet your sources in a malt shoppe? This is equal parts fabricated, cobbled together and misleading,” he wrote. So, does this mean he’s still single? Jennifer hasn’t commented, but may be appearing topless for the first time in a racy upcoming film, so, there’s that. And it couldn’t possibly perform worse than The Switch, right?

Paris Hilton had a nasty scare when a knife-wielding intruder tried to break into her home this week. Luckily, her boyfriend, Las Vegas nightclub owner Cy Waits, was there and had a gun (just like in the movies!). He pointed it at the suspect, who found Hilton’s home with the help of a star map, until cops arrived. Paris has hired two bodyguards to protect her around the clock.

And in happier news, Michael Jackson’s adorable children, 13-year-old Prince Michael and 12-year-old Paris, started school for the first time in California this week. Michael’s mother, Katherine Jackson, has had custody of the three children since her son’s sudden death last summer. Prince wanted to go to school for the “social experience” and their chosen private school is certainly friendly to Hollywood types: Matthew Perry, Nicole Richie, Laura Dern, and Paris Hilton all attended.