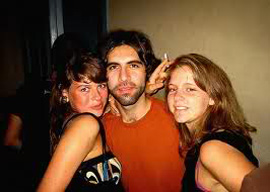 Roosh VHe reports his activities in high-definition detail. Equally stimulating are his mature, value-neutral reflections on the significance of his player mentality and his sturdy, serious discussions of great and interesting books. While such discussions are on the wane in prestigious colleges and universities, they thrive on the blog of a self-identified “sex tourist” whose literary tastes run increasingly in the classical direction. “After reading 100 or so modern books,” Roosh admits, “you hit a point of diminishing return where it’s hard to gain further wisdom. They’re derivative enough that you get feelings of dÃ©jÃ  vu, like you’ve been exposed to the ideas before.”

It’s clear from his writing that when he began, he lacked an agenda outside of sex and wholesale honesty. But in the midst of pickup rejections and sex stories we discover Roosh’s ideological turnabouts. Taking the red pill“identifying and studying kernels of politically incorrect realism”is obviously incompatible with liberalism, he says, and red pills are his business and his pleasure. “But four years of liberal university education does take time to de-brainwash from its subjects. If you give me an impressionable young man, four years of time, and alliances with the government and media, I’m pretty certain I can give him a belief system which would likely remain with him for life, even if it strongly contradicts reality.”

Being too honest is what landed Roosh on a Southern Poverty Law Center list as a threatening captain of misogyny.

Being so targeted, Roosh notes, “has completely evaporated any vestigial liberal thoughts that I held from my university experience.” That evaporation was something he expected, but making the SPLC roster hastened the process.

He recently began to admit concern with Europe’s emerging demographic nightmare, but he maintains a loose grip and declines to seize the tar babies of shrill Internet extremism. He won’t lightly abandon the poolside party for the exhausting, routinized political fray.

Instead he indulges Scotch on the rocks (“Men shouldn’t drink their alcohol with juice”), heavy weights (“Men should do squats”), and of course girls (“Feminine, selfless, and thin. Hard to find in America, hilariously easy to find in Eastern Europe”).

Translation: Don’t look for Roosh on the front lines of political struggle until they outlaw travel and sex.