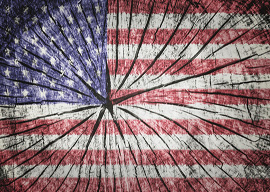 Channeling e pluribus unum makes for heartwarming rhetoric on the stump. But how likely is Haidt’s “Kumbaya” circle to come about?

Sadly, I”m not as sanguine as Haidt about our ability to rally around a common cause. The West, I believe, is too far gone. In America, most native citizens have accepted the notion that their country is a propositional nation, and not one of common kin, faith, and ethnicity. So they are susceptible to the pull of uncompromising ideologies.

Just think: Will gays ever accept religious believers who believe them damned to hell? Will Black Lives Matter and its allies ever get over their grievance with white supremacy? Will illegal immigrants ever self-deport peacefully as long as public officials bait them into coming here and domestic employers hire them?

I see no scenario where these differences can be overcome. What we require is more viscosity. What we”re seeing is heightened tension.

If this rising anxiety doesn”t soon abate, we will be headed toward what Terry Teachout calls a “soft disunion.” Grown tired of living next to each other, Red America and Blue America will agree to an amicable split. There will be no civil war; just a slow drifting apart.

Jonathan Haidt has performed an oracular service by warning us of the great unraveling taking place before our eyes. In the vein of Charles Murray, he even challenged the isolating bias within his own caste of liberal elites. His idea of a renewed national purpose is a good one. I want it to work. Unfortunately, reality has a messy way of vitiating the most hopeful of missions.