A Tale of Two Sisters 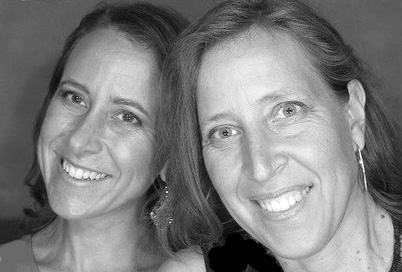 Much of the mania of the moment stems from a growing crisis of faith among elites over how much longer they can expect the ideological dogmas under which they have prospered so mightily to withstand the onrushing findings of genetic science.

No family illustrates this tension more ironically than the Wojcicki sisters, Susan (the former landlady of Google guys Larry Page and Sergey Brin) and Anne (the former wife of Sergey).

Susan Wojcicki (pronounced Wo-jit-skee) now heads Google’s subsidiary YouTube. This month she has taken the lead in corporate America’s march toward censorship of genetic explanations for sex and race differences, getting Google engineer James Damore fired and installing a system for neutering the impact of politically incorrect videos.

Meanwhile, Anne Wojcicki is the cofounder and CEO of 23andMe, a well-known genetic testing service for quantifying your racial past and what your genes might portend for your future.

The Wojcicki sisters enjoyed the ideal nature and nurture for fabulous Silicon Valley careers. Their father was chairman of the Stanford physics department, their mother an energetic teacher at Palo Alto High School, and they grew up in faculty housing on the Stanford campus, surrounded by brilliant scientists.

As you’ll recall, the Internet was initially hyped as a breakthrough that would eliminate the tyranny of location: You could work from anywhere in the world! But, it turned out, where you live matters not less but even more in the Internet Age.

After completing her UCLA M.B.A. in 1998, Susan and her husband bought a five-bedroom house (with help from her parents) in Menlo Park near Stanford for about $600,000. They rented the garage to grad students Larry and Sergey to use as an office. Soon the landlady was working for nascent Google as a marketer and introducing Sergey to her sister.

This month, Susan won the power struggle within Google over software engineer James Damore documenting some of the biological science behind Google’s hiring patterns. (Paradoxically, Damore was fired for defending the hiring practices of Google executives, such as Susan Wojcicki.)

And Susan has now had YouTube enforce, in cooperation with the Anti-Defamation League, a policy of soft censorship of heterodox videos, such as journalist Jared Taylor’s “Race Differences in Intelligence.” Heretics are currently being allowed to keep their videos up on YouTube’s near-monopoly service to deny them martyrdom. But most functionality, such as comments, advertising, and sharing, is being stripped away.

As Susan asked in an op-ed condemning Damore’s impudence:

For instance, what if we replaced the word “women” in the memo with another group? What if the memo said that biological differences amongst Black, Hispanic, or LGBTQ employees explained their underrepresentation in tech and leadership roles? Would some people still be discussing the merit of the memo’s arguments or would there be a universal call for swift action against its author?

Of course, Susan has not used her power to get Google to actually hire a proportional number of blacks, Hispanics, or women. Google’s technical workforce remains only 1 percent black, 3 percent Hispanic, and 20 percent female.

(On the other hand, how much evidence is there for Susan’s contention that “LGBTQ” employees are underrepresented in Silicon Valley? For instance, the CEO of Apple, the only company richer than Google, is gay. And I suspect Google employs a disproportionate number of ex-men transgenders among its programmers.)

Susan’s not going to risk Google’s immense market capitalization by forcing radically different hiring patterns. But she doesn’t want anybody talking about even the possibility that there are genetic reasons behind why Google does what it does when it comes to hiring engineering talent.

In contrast, Susan’s younger sister Anne has been encouraging everybody to talk about genetics and race since she cofounded 23andMe in 2006.

It’s widely assumed in the conventional wisdom that race doesn’t exist or is just a social construct or is merely skin-deep or whatever. But if you send 23andMe a vial of your saliva and $199, they will tell you what your racial background is rather precisely.

For example, Anne has shared her ancestry. She is 100 percent European, with 50.2 percent being Ashkenazi Jewish (i.e., her mother, Esther) and the rest being 41.2 percent Eastern European, 2.7 percent Northwestern European, 0.4 percent Southern European, and 5.5 percent “Broadly European” (i.e., her father, Stanley, an anti-Communist refugee from Poland).

These kinds of racial estimates aren’t perfect, but they’ve improved dramatically since 2009 when one DNA service reported that Larry David was three-eighths American Indian. The price of genome testing is falling with remarkable speed, allowing more and more data to be analyzed at a moderate price.