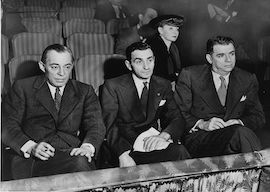 Here’s a question for you: If your wife, husband, girlfriend, boyfriend, even toy boy lied repeatedly to you about a serious matter such as fidelity, would you continue to trust them? I suppose some fools would, but normally not. So here’s another question: How can the British people even countenance voting for those they entrusted with their 2016 decision to leave the bureaucratic dictatorship that is the E.U.? Duh! Actually, I’d be in the U.K. by now and trying to stir things up, but I’m stuck in the Bagel with pneumonia, bronchitis, and all sorts of other bugs that caught up with me while in pursuit of the high life. Never mind. I have a strong constitution and will be up in no time, but it’s Britain and the good old U.S. of A. that I’m worried about. More about this later, but let’s finish about this trust thing.

Two weeks ago we all read what Theodore Dalrymple had to say about the hit job on Roger Scruton. I know Sir Roger and greatly admire him, and he has a beautiful wife to boot, so why does a sophisticated philosopher like Roger fall for such claptrap and give an interview (although on false pretenses) to a nobody called Eaton for a has-been like the New Statesman? The irony is that had Roger said what the mendacious rag wrote he said, I would have agreed 100 percent. The true version let me down a bit. But that’s not the point. Sir Roger should have known what young Taki knew very long ago: The left will lie, cheat, and go to any lengths to discredit good people who do not adhere to the foulest ideology ever, and that includes the Wahhabi disease.

“And now for the land of the freebie and the home of the depraved.”

Now back to the disasters that are Britain and America. (France, forget about her—Macron is an irrelevant frog posing as a mini De Gaulle, but he’s nothing but a con man with a forked tongue who will follow such giants in stature and influence as Sarkozy and Hollande.) Of course, the toxin spread by the lying politicians has turned the once-upon-a-time green and pleasant land into a poisoned atmosphere reminiscent of England 600 years ago. And the people to blame are extremists like Jeremy Corbyn, out-and-out liars like Theresa May, and those who are behind the extremists, like the BBC and The Guardian and so on. Take it from Taki, these are people and institutions never to be trusted or believed, although all of the above can and would sell you some very valuable but cheap-in-price beachfronts off Misrata and Benghazi.

But I do feel sorry for all the decent people of Britain who have never gone to extremes and have (like fools) trusted their chosen representatives. It’s like discovering your mother hooking for spare change. The only man to have kept his side of the bargain has been Nigel Farage, and for that fact alone—being truthful to voters—he is being attacked by the bandy-legged louts and their cesspool cousins of the left.

And now for the land of the freebie and the home of the depraved: One needs to be depraved to demand that Dzhokhar Tsarnaev—yes, that nice young man who bombed the Boston Marathon a few years ago—be given the right to vote, as most Democrat candidates are calling for. The people he and his scumbag brother murdered lost their lives and their voting rights, and now it is he who should vote in their place?

What about the “Edelweiss” moment? The homely Maggie (the maggot) Haberman of The New York Times wondered, after listening to the Marine band play the tune from The Sound of Music at a Trump event at the White House, how nefarious it was. In other words, Hitler, “Edelweiss,” Nazis, Trump, etc., etc. It was written by two great American Jews, Richard Rodgers and Oscar Hammerstein, and it’s as Nazi as you are Helen of Troy, Maggot.

Which brings me to more bullshit (actually great theater): What about the Oklahoma revival? Written by the same two Nazis, Rodgers and Hammerstein, the terrific musical about beautiful mornings and corn as high as an elephant’s eye has been turned into a politically correct farce attacking gun culture, class discrimination, and a corrupt justice system (that doesn’t give the vote to professional criminals). I went to see it and walked out. I probably got the bug that’s killing me in that hall infested by lefties.

Finally, a young white female jogger is raped and murdered by a black thug; his DNA is found on her and he confesses to the rape-murder. After he gets life he is made out to be a victim of white injustice by black community leaders in New York. And the man screaming racism the loudest is Assemblyman Charles Barron (an elected official). Jon Snow should come over and make nice with him. They would be good together. They both hate whites and both need the Hubble telescope to locate their penis. And I leave you with a society item from the gossip columns: “Ma (a hip-hop hellion) spent six years in the slammer for nearly shooting to death her ex-pal Makeda, and released on Wednesday she declined to comment while holding hands with her rapper hubby, Papoose, and flanked by longtime mentor Fat Joe.” Society is greater than ever.