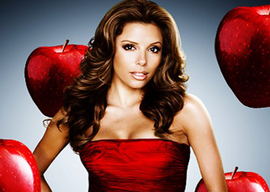 Last week Americans learned that Barack Obama”the name he settled on after three decades of indecision“had for years told publishers and admissions officers who are mandated to reward exotic humanoids exactly what they wanted to hear: that he’d been born in Kenya.

Meanwhile, Elizabeth Warren went from the Democrats’ Next Big Thing to the setup for a thousand corny “Indian” jokes after her widely touted “Cherokee” ancestry turned out to be illusory“but not before she’d used it to stack up “affirmative action” points in academia. (She’d even contributed an ancient tribal recipe to the Pow Wow Chow cookbook. A recipe for…“a crab dish.” Alas, Remington never got around to casting a Cherokee brave in bronze, hunting crustaceans as they scuttled across the Plains.)

They’re also examples of affirmative action in action. Actress Eva Longoria doesn’t even have that excuse. In 2009, the dusky Desperate Housewives star enrolled in the CSU Northridge Chicano Studies program, the better to serve as one of Obama’s Hispanic celebrity “consultants.” She’s mused about painting the White House a less offensive color.

(Note how equally disappointed other test subjects are to learn that their minority blood is in the minority.)

Longoria’s not a very “wise Latina,” but great news:

America never used to be this sick.

It’s not that leftists have taken over the asylum.

They’ve turned the whole country into one.