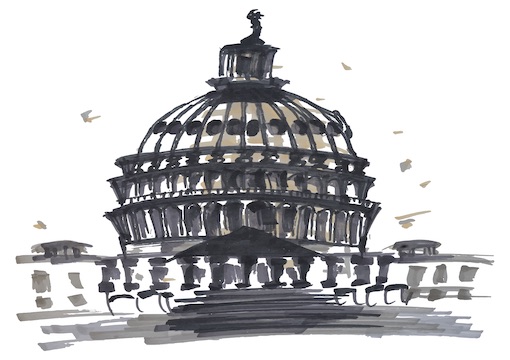 This week the ruling class will install Mumbly Joe Biden as the 46th President of the United States and symbolic ruler of the empire. This will take place in a scene out of a Hollywood movie. The Imperial Capital looks like a war zone, with 25,000 troops patrolling the streets and the core of the city closed off entirely. Biden will take the oath of office behind layers of razor wire fencing and heavily armed soldiers.

The grandees of official Washington, of course, will be celebrating. Their long nightmare has finally come to an end. Donald Trump has been evicted from their presence. For four long years—in defense of our democracy, of course—they have labored to get the rightfully elected president removed from office. That day has finally arrived. To put it another way, they will not have Donald Trump to kick around anymore.

The question lurking on the edge of those celebrations is, can they reel back the madness they have unleashed over the past four years? Largely due to their reaction to the 2016 election, they have smashed every institution on which their legitimacy rests. The narrative thread of the past four years has been establishment types corrupting the institutions to undermine the Trump administration.

“The narrative thread of the past four years has been establishment types corrupting the institutions to undermine the Trump administration.”

As it stands, roughly half the country thinks the election was rigged and that future elections are going to be rigged. It is pretty much impossible to sell the whole democracy thing when half the voters do not trust the voting process. Lost in all the excitement is the fact that Congress has an approval rating of just 15%. The fact that the “people’s house” now sits behind layers of razor wire and is patrolled by the army does not help their image, either.

One way the ruling class could rebuild their reputation is to find a way to turn down the temperature in public discourse. The best way to do that is the old bread-and-circuses approach, mastered by the Romans. Get people out having fun instead of engaged in politics and things will calm down a notch or two. Of course, that means people must be able to go outside, and they must have the wherewithal to go have fun.

That is going to mean winding back the Covid panic. Coincidentally, some big-city mayors are now calling for an end to the lockdowns. The trouble with that is Mumbly Joe is calling for a three-month crackdown to “beat the virus,” which means no relief until the spring. There is also the fact that they spent a year gaslighting people into thinking this is the black death. The Covidians are now deeply invested in the virus.

Then you have the fact that the virus has become an industry. Eric Hoffer noted that in America “what starts out here as a mass movement ends up as a racket, a cult, or a corporation.” In the case of Covid, we have all three, thanks to the ruling class selling this so hard to damage Trump’s reelection effort. Covid is now a multibillion-dollar industry with a very large religious following. Reeling that back in will take a long time.

Then there is the economy. Like everything else we get from government, the economic data is mostly junk, but we know there has been massive damage. All one must do is drive around the business parks to see what is happening. Those empty parking lots are not entirely due to people working from home. There has been a massive dislocation in the economy over the past year, and that will become clear in 2021.

The American economy is a big, complicated organism. Shutting down the hospitality industry, for example, is not just about hotels and restaurants. It is about those supply chains that provide all the goods and services to those front-end businesses. With demand well below half of normal for a year, many of those supply chains have contracted as well. The consequences of this massive dislocation will take years to repair.

The ruling class has its work cut out for them if they think they can reel back the Covid stuff and get the economy going again in 2021. That may be the least of their worries, as they have unleashed other demons that may be far worse. Their own bomb throwers are not satisfied with Mumbly Joe in the White House. They want blood, and they are not going to be bullied by the geezers running the government.

Radicals in the Democrat Party are pushing legislation to criminalize dissent, branding any disagreement with official policy as domestic terrorism. Ocasio-Cortez, the Puerto Rican barmaid now serving in Congress, is demanding the South be liberated from the white men who lived there long before her people arrived on these shores. If the party wants to lower the temperature, they first must silence their own shock troops.

Then there is the newly radicalized right. The Epiphany Uprising and the aftermath has radicalized millions of Americans. It is not just the young Zoomers out in the streets causing trouble. Young people always like giving the finger to the man. Their parents and grandparents are suddenly hostile to the system. The New Right that is emerging has had a taste of being bad, and it feels good. They like being bad.

To make matters worse, the oligarchs have been radicalized as well. The crackdowns by the tech oligarchs and the bankers are just a start. They are promising to purge the public square and large swaths of the private square of dissent. No one can know what that will mean, but we do know it will not deradicalize the right. In fact, it has become a major issue around which the new radicals are rallying.

This is not something to be dismissed. The shutting down of Parler is looking like an inflection point in this crisis. Millions of conventional conservatives had flocked to that platform, believing the marketplace was speaking. When the oligarchs closed that site, they did not just close a website. They put the lie to much of what the Republican base has been told for the past few generations.

The bottom line is, while the ruling class is partying behind their barricades this week, the problems facing them grow worse. It is more than a bit ironic that they have picked now to embrace a siege mentality and bunkerize the Imperial Capital. They have broken the country so thoroughly that the only thing that could possibly unite the people is the shared hatred for the people on the other side of those barricades.