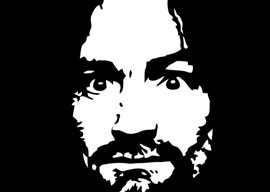 Take environmentalist Dr. David Suzuki. Despite preaching about overpopulation and over-consumption to generations of admirers, Suzuki has five children and owns a number of million-dollar properties. Here he is in full hippie guru mode back in 1972, comparing human beings to maggots.

And throughout my lifetime, he’s topped poll after poll as the “most admired Canadian.”

Then there’s Weather Underground leader Bernardine Dohrn. A few months after the Tate-LaBianca murders, Dohrn tried to popularize a radical alternative to the “peace sign” hand gesture that she called the “fork salute.” At the group’s December 1969 “war council,” Dohrn explained that it represented the admiration and solidarity she felt for the Manson Family:

Dig it! First they killed those pigs, then they ate dinner in the same room with them. They even shoved a fork into the victim’s stomach! Wild!

Dohrn and her husband, fellow domestic terrorist Bill Ayers, are now much-lauded “educators” and “community activists.” Back in the 1990s, they hosted a “coming out” party at their well-appointed Chicago home for an up-and-coming local pol named Barack Obama.

Beneath that Rolling Stone article, a flame war broke out in the comments. Some readers detected an unsettling pattern: First the magazine made the surviving Boston Marathon bomber into a Teen Beat cover boy; now here’s a creepy old career criminal being described as looking “pretty great” by a writer who seems, at times, under the guy’s spell.

“Shut up,” the magazine’s defenders explained.

[Right after the Manson Family’s arrest] I called Jann Wenner, the publisher of Rolling Stone, and told him about all these strange goings on. I said I thought there was more to the Charles Manson story than was being told. I felt the whole counterculture was on trial here and we needed to tell our side of the story.

Jann, in his characteristically enthusiastic way, said: “Let’s do it! We’ll put ‘MANSON IS INNOCENT!’ on the cover.”

That didn’t happen, of course. Dalton, then Wenner, came to their senses. But that took a troublingly long time”that is, more than five seconds”and Dalton in particular was reluctant to drop his delusions of Manson’s hippie-leader grandeur, even after meeting the obvious nutjob in person.

At the risk of sounding like, well, a crazy old hippie:

If the difference between Manson’s philosophy and the “green” garbage your kids are force-fed in school is simply a matter of degree, what if Charlie’s biggest crime was getting caught? (Man?)