Alain Finkielkraut vs. the End of Civility 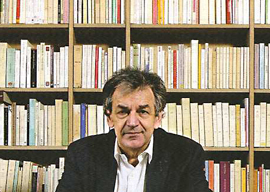 If I were in Paris this week, I”d be looking for a nice mosque to hide under. In a video released Monday, the Islamic State called for extra helpings of worldwide jihad from the Islamic diaspora, with special venom on tap for one Enlightenment republic in particular: “If you can kill a disbelieving American or European”especially the spiteful and filthy French … kill him in any manner or way however it may be.”

That is some old-fashioned, euphemism-free ethnic loathing. Now, hatred may be shamefully irrational, but rare is the saint who doesn”t feel it toward at least one person. The trick is to handle that emotion in a civilized fashion”which often means “Don”t go rubbing your own nose in people you dislike.” If, for example, there was an entire country populated by clones of Lena Dunham, no number of government handouts could ever entice me to move there. I don”t want to go insane.

So why is it that every time I”ve been in France over the past 20 years there are yet more Muslims who have chosen to move there despite the fact that they ooze hatred for the French from every pore?

I thought Catholics were supposed to be the masochists.

And France’s public intellectuals are increasingly quiet on the subject”even as car-burning riots become commonplace and no-go zones where indigenes daren”t set foot proliferate. Much like in the U.S., amongst the French intelligentsia, anything that anyone might possibly see as white racism is a marker of low social status; only white trash, the conventional wisdom goes, could object to the increasing ferocity of anti-white, anti-French, and anti-Jewish sentiment and violence to which the country is subject.

“Meanwhile, the Front National”the party of right-wing untouchables”has become the electoral choice of working France, to the shock and horror of the left.”

But not everyone has fallen in line. Last year, the respected intellectual Alain Finkielkraut shot himself right in the foot with his thirty-oddth book, the civil and eloquent L”IdentitÃ© malheureuse. Therein he makes the case that French identity itself is in crisis: the Franco-French are no longer allowed to have a say in the cultural definition of their own nation.

The maelstrom has been predictable, and had Finkielkraut actually been Franco-French he would likely not be getting TV time to defend his ideas. But his own pedigree”as the son of Jewish World War II refugees from Poland”lends him just enough PC points that he may whisper such terrible things.

(This permission is far from absolute; whenever he’s put on the air he’s made to debate a mob of bien-pensants who specialize in snickering ad hominems, mostly “you”re old!” and “raciste!””although, as this summer’s round of mob violence testified, Jews who hate Muslims hardly appear to comprise France’s chief racial problem.)

L”IdentitÃ© malheureuse, like most of Finkielkraut’s work, has yet to appear in English”which hasn”t stopped American leftists from having at him anyway, jumping on the opening section of the book, where Finkielkraut defends the infamous French ban of the Islamic veil in the schools and other public places.

Americans perennially fail to understand the French fetish for separation of church and state”understandably, since we have never experienced the exquisite joys of theocracy quite the way Spain’s neighbors have done. We call it freedom of religion; they call it freedom from religion, but as usual, we think we know how everyone else should go about being a free country.

Some of the French don”t get it either: the usual socialists are complaining that the 1905 legal affirmation of laÃ¯citÃ© (secularism) in public life lay unenforced for decades and was only pulled off the shelf recently in order to persecute Muslims. (They fail to mention that, for all those decades, French Jewish and Catholic institutions more or less cooperated with the ban on public meddling. If the Second Amendment weren”t under threat in the U.S., no one would mention that, either.)

There are plenty of Muslims in France who are contentedly integrated. The French have a long history of absorbing small numbers of foreigners with relative ease”thanks in large part, according to Finkielkraut, to the strictly laÃ¯que public schools to which he owes his erudition.

Finkielkraut recalls his own educational experience as the son of refugee immigrants back in the day: he never had his foreignness thrown in his face and wasn”t maltreated for it, but he was expected to learn the French classics as they were presented to him. And he’s the better for it: to paraphrase his own words from an interview, he may be something of an outsider, but he is happy to pay his debts to the French civilization that shaped him as an intellectual.

But among the unprecedentedly large numbers of recent immigrants, some seem to be more interested in intimidating the French out of their own communities than in becoming part of their society; this breakdown in the process of assimilation coincides with the new code of politically correct, student-friendly rather than strict curricula in the schools. As he recounts in the book, Finkielkraut recently visited his old primary school. There he found a bulletin board posted with a map of Africa, to which students had affixed cards saying “I”m proud to be from [insert foreign country]!”