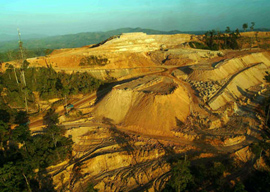 Following my recent tour of the Petropavlovsk gold project in Eastern Russia, I opted to return home by a somewhat circuitous route, spending two days in Haida Gwaii, off Canada’s Northwest Coast, before proceeding via Calgary to New York and thence on to London.

I stopped in Haida Gwaii, formerly the Queen Charlotte Islands, to drop in on Peregrine Lodge, one of the world’s most sensational salmon-fishing lodges. It was here one foggy September morning some years ago that while fishing with my old friend Gavin “Oily” Wilson, a giant in the energy investment field, we both hooked salmon at the same second. While my fish weighed around 30 lbs., Oily’s was some ten pounds heavier. They were good fish. Wild salmon of this size are as strong as sumo wrestlers, and one needs a fair amount of space to bring them onboard. The boats at Peregrine are small, and the ensuing struggle resembled something from Fred Karno’s traveling comic opera troupe, but somehow me and Oily emerged victorious.

Sadly it was too late to do any fishing this time. The season runs from June to mid-September, but the place is beautiful and my memories from Peregrine are good ones”better at any rate than the memories of what happened two days later.

I always stay at the Carlyle when in New York. It is the jewel in the crown of Manhattan. Situated between 76th and Madison, the hotel is as fine as it is famous: comfortable, old-fashioned, chic, and boasting one of the world’s greatest piano bars. It was here that the legendary Bobby Short used to play, a piano player so celebrated in his day that even the street outside is named after him: Bobby Short Place. Bobby had started at the CafÃ© Carlyle in 1968 as a fill-in for George Feyer and subsequently became an institution, championing such famous composers as Eubie Blake, Duke Ellington, and Billy Strayhorn. Arriving in town at 9 p.m. on Saturday, it seemed a suitable hour to seek out Joe at Bemelmans bar and have him rattle me up a Sidecar the way only Joe can. The Loston Harris Trio, as good a trio as you will find anywhere, went on at 9:30. They started their set with Cole Porter’s “I”ve Got My Eyes on You” and had moved through “Samantha” to Irving Berlin’s haunting classic “Let’s Face the Music” when I first spotted Daniel C. Leghorn.

“He was a short, bowlegged, queer-shaped sort of fellow. Either he had ridden a lot of horses or had rickets as a child.”

He was a short, bowlegged, queer-shaped sort of fellow. Either he had ridden a lot of horses or had rickets as a child. And he appeared to be zoning in on me as he weaved across the floor from the far side of the room.

He stopped less than two feet short of me. Swaying uncertainly, he stared dumbly through nebulous eyes.

He had me at a disadvantage.

He was clearly confusing me with another, and I told him so.

“Oh yeah, Scot today, Irish tomorrow, but you ain”t foolen” me. You”re Welsh from Bre-X. You cost me my wife and my life shavings [sic]! Don”t care about the wife, but I sure as hell care about the money.”