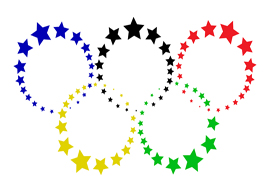 The Olympics tend to be the Island of Misfit Spectator Sports, showcasing competitions that got left by the wayside of popularity, such as volleyball and diving.

So every couple of years when the Olympics roll around, there is much grumbling about how outmoded they are. Yet large numbers of people always seem to end up watching the Olympics anyway and having a good time.

We are constantly lectured by globalist elites that we live in an age of cosmopolitanism in which it is wrong to root for our fellow citizens. How dare we Americans care more about Americans than we do about Eritreans? You”d have to be Hitler to feel that way.

Extolling the “ultimate wisdom of a borderless world” has become a fad among establishment icons such as Bill Clinton and John Kerry.

For Americans to have their own country is a flagrant violation of the civil rights of foreigners to move here no questions asked.

And yet the Olympics are organized along nationalist lines, and that’s what makes them watchable.

We live in an era of dwindling cultural diversity in which a handful of sports, most strikingly soccer outside the U.S., increasingly monopolize attention. (In America, the NFL would dominate almost as much as soccer does in South America and Europe if pro football weren”t so physically debilitating that it can”t be played year-round.)

“The Olympics are organized along nationalist lines, and that’s what makes them watchable.”

Due to the Olympics” commitment to amateurism for much of the 20th century and the IOC’s continuing refusal to pay prize money, the Olympics largely comprise those spectator sports that didn”t quite make the hurdle to professional success, such as track and field, rowing, and wrestling.

And the big-money pro sports that appear in the Olympics, such as basketball, soccer, tennis, and, this year, golf, tend to be closer to exhibitions than hard-fought championships.

During the late Cold War era, the basketball rivalry between the American college amateurs and Soviet grown-ups was well-balanced. But the breakup of the Soviet Union (especially the liberation of Lithuania, a very tall nation) and the American decision in 1992 to send NBA pros have turned the Olympic basketball tournament into a rather dispiriting exercise in finding out whether the American team plays up to its talent and crushes all before them or messes up and loses.

The Olympics added golf in 2016, but pro golfers have been unenthusiastic about playing simply for medals. The U.S. Olympic Committee does pay American gold medalists $25,000, but the International Olympic Committee pays nothing to winners.

The Scottish culture on which golf is founded differed from English aristocratic amateurism by viewing both amateurism and professionalism as honorable paths. But in golf, playing for nothing but medals is for amateurs. Golf pros, in contrast, play for four-foot-wide novelty checks with seven-digit sums inscribed on them.

So the top four male golfers seized on the threat of the Zika virus inflicting microcephaly upon their future children”golf pros are a philoprogenitive lot”to skip playing for glory but no cash.

So, the Olympics aren”t blessed with the most popular sporting events of the 21st century.

And yet, the Olympics usually turn out interesting to casual fans.

Feelings of patriotic solidarity help us organize the blooming, buzzing confusion of the world. Without nationalistic enthusiasm, the Olympics would be just a blur of games that we don”t follow and athletes we haven”t heard of. Who are these eight strangers splashing facedown in the swimming pool and why should I care?

But add patriotic solidarity”Oh, the one in lane 5 is American? Go! America first!”and the Olympics are suddenly good television.

We are informed that the Olympics are plagued by performance-enhancing drugs due to the evils of nationalism. And indeed the use of performance-enhancing drugs is usually said to trace to 1950s weight-lifting and throwing competitions between the Soviets and the Americans. But by the late 1950s steroids had made the leap to college football and by 1963 to pro football, so after a half century of abuse by private teams it’s rather late to put forward the argument that nationalism but not capitalism encourages steroids.

In truth, nationalism is the main reason anybody ever gets caught for cheating. If a Hungarian lady swimmer records times more like a Hungarian gentleman swimmer, American and Australian swim-team insiders grumble. Slate complained about the nationalistic complaints:

Of course, an excess of skepticism about drugs has hardly been the defining trait of the past half century of sports journalism.

The first drug-testing program ever to have a statistically measurable impact on cheating was implemented after rivalry between Canadians and Americans led to out-of-control Canadian sprinter Ben Johnson being caught by the primitive tests at the 1988 Olympics. The Canadians loudly responded that they were being singled out and that everybody knows the Americans were cheating too. Better drug tests were promised by the 1992 Olympics; the American heroine of the 1988 Games, Florence Griffith-Joyner, immediately retired.

Nationalist rivalries tend to lead to less corruption overall because competitors have incentives to police one another.