America, Zionism, and the Path to Mutual Respect 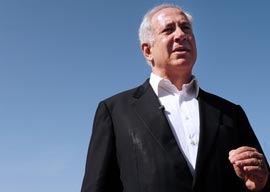 With Tuesday’s election, Israel is back in the news.

I”m writing this Monday night, so I don”t know who has won. And you may not know either because Israeli politics are so carefully calibrated that governments often aren”t formed until after several days of post-election horse-trading.

Israeli politicians are intensely aware of the game theory logic that winning with a comfortable majority just means your pie has to be cut into smaller slices, so having too many coalition partners is almost as bad as not having enough.

For example, in 2012, Likud prime minister Benjamin Netanyahu was strong enough that his centrist opponents submitted to entering a grand coalition under him, giving Bibi 94 of the 120 seats in the Knesset. It was widely predicted that Bibi would use his 78 percent majority to do big things, such as restart peace talks with the Palestinians. But it soon fell apart. From Netanyahu’s perspective, why would you want all those extra legislators, each with his own demands? (And, for that matter, why would Bibi feel he needs peace talks with the Palestinians?)

Of course, when is Israel not in the news?

This country of 8 million dominates the front pages of American newspapers, especially in comparison to Mexico, a nation of 122 million that shares a 1950-mile border with the United States. For example, the New York Times, which offers relatively thorough coverage of Mexico in its back pages, has mentioned “Netanyahu” in 7,268 articles over the last year. In contrast, the Mexican president’s name, which, as we all know, is … uh … oh, yeah, he’s that fellow who looks like a 21st Century San Diego anchorman, Enrique PeÃ±a Nieto. Anyway, “Nieto” has come up only one-fifth as often as “Netanyahu” in the Times.

Even though there are perhaps 35 million Mexicans in the United States, almost nobody who is anybody here finds Mexico terribly interesting. The exception is Republican presidential candidate Jeb Bush, who seems to view it as his mission in life to complete the Bush Dynasty’s multigenerational campaign, going back past NAFTA to George H.W. Bush’s illegal oil operations in Mexico, to break down that pesky boundary between the two neighbors: borders are bad for business. And if Jeb’s further Mexicanization of the American electorate happens to help elevate a mestizo Bush to the White House in the next generation, what’s not to like?

“Since American whites aren”t allowed to display ethnic pride in themselves, Republicans displace their feelings onto Israel’s uncowed Likud Party as a respectable proxy.”

Jeb’s Mesoamerican Dream would seem pretty interesting, but, apparently, like most things concerning Mexico, it’s not. The reality is that quality beats quantity these days, and, Jeb aside, the top ranks of American life are much more intertwined with Israel than with Mexico.

For example, political consultants slide back and forth between the U.S. and Israel all the time. Prominent journalists such as Jeffrey Goldberg, author of “Is It Time for the Jews to Leave Europe“ in The Atlantic this month, move between the countries. Republican donor Sheldon Adelson and Democratic donor Haim Saban are powerbrokers in both America and Israel.

Netanyahu himself speaks English with the accent of the Philadelphia high school from which he graduated. Although born in Israel, Bibi was resident in the U.S. in 1956-58, 1963-67, 1972-1978, and 1982-1988. Pesky Constitutional technicalities about the President having to be a “natural born citizen” aside, many Fox News viewers would like to see Netanyahu run as the Republican candidate for President of the United States.

And American Democrats root for Netanyahu to lose in Israel. The Jewish State’s elections have become a sort of March Madness for American politics fans.

In reality, the foreign policy consequences of Israeli elections are usually modest. Israeli policies, such as occupying the West Bank and the Golan Heights over the last 48 years, show impressive continuity despite numerous changes of government.

On Monday, for example, the world was shocked to hear Netanyahu say he would never allow the creation of a Palestinian state. The shocking part, of course, was his saying that, since various Israeli governments over the decades have had ample time to allow that to actually happen, but never seem to get around to it.

Perhaps the most important foreign policy difference between Israel’s two major political wings has been one of tone: the Israeli right expresses its reasons of state using language that American Jewish liberals find needlessly offensive, while the Israeli left traditionally attempts to assuage their American cousins” troubled consciences with more diplomatic-sounding verbiage.

But the policies haven”t differed much, as the first Likud Prime Minister, Menachem Begin, pointed out in a frank 1982 speech rationalizing the war he and Ariel Sharon had chosen to launch by invading Lebanon. Begin observed that Labor governments had similarly started wars of choice in 1956 and 1967. Begin observed:

In November 1956 we had a choice. The reason for going to war then was the need to destroy the fedayeen, who did not represent a danger to the existence of the state.

The 1956 Suez Crisis was an elaborate conspiracy among Israel, Britain, and France. First, Israel invaded Egypt’s Sinai Peninsula. Then the old colonial powers invaded, ostensibly to separate the combatants, but actually to seize the Suez Canal. The misadventure ended in shame when President Eisenhower reacted with distaste to the transparent ruse.

In June 1967 we again had a choice. The Egyptian army concentrations in the Sinai approaches do not prove that Nasser was really about to attack us. We must be honest with ourselves. We decided to attack him.

Although Israel’s foreign policies have been endlessly hashed over in America, Israel’s domestic policies, such as immigration, are quite interesting. Americans don”t really understand Israel because our public discourse is so much more constrained by mental no-go zones than in the freer Jewish State.

For example, a major issue in the Israeli campaign has been the high cost of housing, which is tied by simple supply and demand economics into Israel’s spectacularly successful population policy of encouraging Jewish births while discouraging births among Muslims (and Ethiopian Jews).