An Evening With the “Rape Me First, Kill Me Last” Crowd 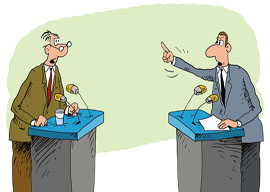 Mark Steyn rose and responded to the hilarity:

“I”m slightly amazed at our colleagues” ability to get big laughs on gang rape. Madame Arbour scoffs at the “newfound feminists” over here. I”m not much of a feminist, but I draw the line at the 3-year-old getting raped and the 7-year-old getting gang-raped in a basement…. Madame Arbour [who has been presented to us for years as a woman responsible for the extra-definition of rape as “a crime against humanity”] was very clear in Sudan: that rape is not about sex; whatever Simon may say, rape is about power…”

And so forth. It was our side’s turn to hoot and fist-pump. Arbour’s pinched face betrayed embarrassment and fury. Schama visibly shriveled, and in a revealing indication of just how “principled” his principles really are, quickly pivoted to try to establish some common ground with Farage and Steyn, whimpering something about “Western values.”

On the subject of “pivots,” behold:

The post debate vote is 55% pro and 45% con. The con side shifted 22% of the vote from the pre-debate results. Con wins.

The anti-refugee champions “doubled their vote over the course of the night,” a victorious Steyn observed, judging it “not a bad result with a tough Trudeaupian crowd.”

Indeed. My obnoxious victory dance at the after-party aside, I remain pessimistic. Another friend surveyed the crowd and muttered, “These assholes are still the ones who run everything.”

For that and so many other reasons, I”ve vowed once more to “never leave the house again.” Although since I doubt I will ever be welcome again at such a fancy-schmancy thingie in this town, that promise is probably moot.