An Overdose of Hope 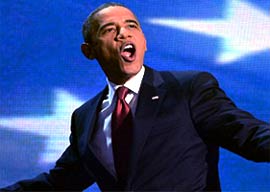 Ex-president and serial philanderer Bill Clinton gave the convention’s best speech, blaming the Republicans for everything and sidestepping his culpability in the subprime loan debacle and for signing NAFTA.

Vice President Joe Biden literally misused the word “literally” at least five times, at which point we stopped counting. The country has “literally stood on the brink of a new Depression,” it was “literally on the verge of liquidation,” it “literally amazes him” that important issues “literally hung in the balance,” and how “the direction we turn is”not figuratively”literally in your hands.” We literally didn’t know you could turn a country’s direction using your hands. A film showed Biden claiming that Obama “has a backbone like a ramrod.” Are we reading too much into that?

His ears spread wide, a haggard Barack Obama took the stage looking as if he’d lost roughly 50 pounds of mojo since 2008. Openly groping for the female vote, he acknowledged his love for his steroidal wife Michelle and his adorable daughters, Bulimia and Sausage. He spoke of hope, and of moving forward, and of moving forward hopefully, claiming that he wasn’t merely peddling “blind optimism or wishful thinking.”

The convention’s theme was summed up in a single word: FORWARD. The Republicans want to go back, but the Democrats want to go forward, as a possibly sloshed Jennifer Granholm screamed at conventioneers like a transsexual Howard Dean. Everyone reassured us that Obama inherited a bad situation and will need four more years before he gives us the slightest inkling that we’re moving forward. He needs to finish the job he started. Going forward is always good, even if you’re headed toward an iceberg.

And the only way we can move forward is together. The Democratic Ministry of Truth informs us that “Government’s the only thing we all belong to,” whether we choose to or not. An “actress and advocate” named Kerry Washington, who from the looks of things is yet another strong, intelligent, sassy, smart, empowered young black woman, cheerily uttered the vaguely terrifying line, “You may not be thinking about politics, but politics is thinking about you.”

The only thing we need to move forward together is hope. More hope. There obviously wasn’t enough hope last time, so if you’re feeling all hoped-out, keep hope alive. They hope you keep hoping. Keep re-hoping. Hope is our soma. Hope is our only hope, even though the guy who did those HOPE posters for the last election turned out to be a plagiarist and liar.

Keep hoping until your ass falls off, even though Obama promised to cut the deficit in half but has piled $5 trillion on top of it. Keep hoping even though he pledged to unite us but shattered us all like glass. Keep hoping through four more years of violent flash mobs and speech codes and moral panics and psych meds.

Keep hoping until your brain explodes, because under Barack Obama, we finally have a nation where people of all colors, genders, sexual orientations, and creeds can be imprisoned for life without trial.