Anders Breivik: Too Sane for Comfort 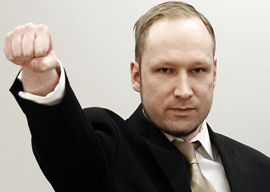 I do not mind immigrants in the slightest. I am an immigrant. I”m British and live in Italy. Che Dio mi salvi! The Italians tolerate me (easy) and I tolerate them (not so easy). But me and the Italians muck along together more or less OK.

But I mind immigrants when their culture aims to destroy mine. Islam is just such a culture. It is enough to look at the Muslim view on women, gays, and Jews to understand that. I seem to recall that like the Muslims, the Nazis were not all that keen on the Jews. Nor were the communists, though the left has always tried to bury the fact.

Like other normal Europeans, what bothers me are immigrants from a culture that clashes head-on with mine who refuse to adapt. Multiculturalism, the dominant ideology for decades, not only permits this; it positively promotes it.

It reminds me of another unholy alliance, the one between Hitler’s Nazis and Stalin’s communists at World War II’s onset. They were united”between August 1939 and June 1941 at least”by their common enemy, capitalist imperialism.

Here the multiculturalists speak with forked tongue. On the one hand, they say: “No, Islam poses no threat to our culture and you”re just being paranoid.” But on the other hand, they say: “Yes, Islam does pose a threat but we, too, want to overthrow our own culture, so it’s great, innit?”

The Euro left loves to explain Islamic terrorism as an understandable, even justifiable, product of Islamic-world poverty that “the West” presumably caused.

In other words, Allah’s will does not come into the equation and the West had it coming and so yes, actually, it deserves Islamic terrorism.

Yet no one is even allowed to use similar arguments in regard to those sacred left-wing cows”mass immigration and multiculturalism”to explain Breivik’s actions.

Italian journalist and author Oriana Fallaci wrote a trilogy of best-sellers after 9/11 whose impassioned thesis was that Europe is destined to become Eurabia thanks to its rampant multiculturalism and its suicidally low birth rate. Europe has neither the will nor the means to defend itself.

Naturally, la Fallaci was shouted down as a right-wing racist extremist by the PC cultural commissars and threatened with death by Muslim groups. She was never invited to the right (i.e., left-wing) dinner parties. Not that she would have wanted to go. But those three books sold millions of copies.

Breivik said the same things as Fallaci during his trial.