As White Collars Fade to Blue 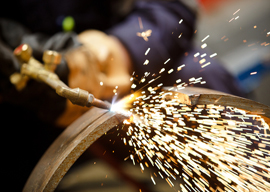 Our church recently held a graduation ceremony for our high-school seniors, who stood in front of the congregation and talked about their dreams and plans. The one who struck me most was the young man, already father of a child, who said, “I plan to get a two-year degree in welding and make a living to raise my daughter.”

He not only had a plan, he was pursuing an employment field where there is a need. Welders are in demand and are reasonably paid these days.

Since jobs are tight for college graduates (with a 53% unemployed or underemployed rate), I wonder how long it will take for young blue-collar workers to rise to the top of the economic food chain.

In a remarkable inversion of modern American culture, how long will it be until the kids with expensive four-year degrees or graduate degrees wish they had pursued heating and air, electronics, welding, pipe fitting, two-year registered-nurse degrees, or other low-prestige programs which nevertheless provide incomes?

“I wonder how long it will take for young blue-collar workers to rise to the top of the economic food chain.”

Regardless, my friends and medical colleagues are still putting away money left and right, doing all they can to ensure that their kids can go to the nation’s finest colleges and earn their coveted four-year degrees, followed by graduate or professional degrees, which (depending on course of study) may result in little more than service-industry jobs.

Few of them follow the numbers these days. They remain convinced that yesterday’s educational pathways will continue into the future. I think it’s a shocking self-delusion considering that my own career has changed dramatically in the 22 years since I became a physician. (The “filthy rich” doctor is becoming a rare species.)

What will kids who have been highly educated”or even overeducated”do? What about parents who will be shocked that their honor graduates, their valedictorians, their SAT-mastering kids aren’t going to have good jobs?

Those with degrees act as if they are entitled to good jobs and benefits exactly like their parents had. We have seen this mentality in the battles with Wisconsin teachers’ unions and in the pathetic discontent that populated the Occupy movement, as advanced degrees offered no advantage to young people who refused to work jobs that were “beneath” them.