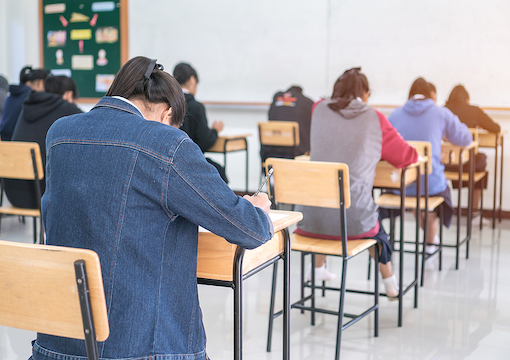 The more we get lectured about White Supremacy, the even less supreme whites get, both quantitatively and qualitatively. Is this merely because whites are losing power demographically and thus it’s ever more risk-free to insult them? Or is it also that white performance is being depressed by all the libels?

For example, one of the most striking but least mentioned stories of the 21st century has been that Asian-Americans have been pulling away from whites on a variety of measures. But Asians are the great unmentionable during the Black Lives Matter mania, because they don’t fit into the fashionable narratives of White Privilege and Systemic Racism.

The results don’t fit in with the usual journalistic portrayal of whites as effortlessly dominant both in numbers and in rankings.

Whites are down to only 41 percent of high school seniors taking the SAT.

Even more strikingly, the gap between the mean scores of Asians and whites has grown from only 6 points in 2000 to 113 in 2020. The standard deviation is around 210. So the median Asian in 2020 would score about the 70th percentile among whites.

Here is the graph by The Unsilenced Science: 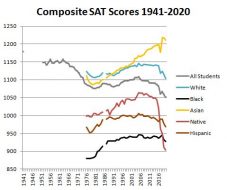 As you’ll note, this graph is a rare one in using colors that are easy to remember for the different races.

I don’t know how well you can compare scores over time; the SAT is modified fairly frequently. This graph is supposed to be adjusted for changes in scoring, such as the big inflation of verbal scores in 1995, but who knows how precisely that can be done? Still, comparing groups at any single point in time is reasonable.

How do SAT scores work?

But that original mean of 1000 was based on a study of New England prep schools, which had wealthy student bodies and were good at teaching verbal skills. So a 1000 back in Holden Caulfield’s day was roughly equivalent to 1150 today. Average scores declined in the 1960s–1970s as less select students took the SAT and as students (and teachers) smoked more dope. But the 1980s and 1990s saw a modest rally in performance, followed by a drift downward in the 2000s as more Hispanics and blacks took the test, followed by a sharp fall in recent years among all groups other than Asians.

In 2020, the overall mean is 1051, the lowest average score in the eight decades of SAT testing. But the expansion of testing in recent years makes the fall in the average somewhat less worrisome.

Asian SAT scores have increased fairly steadily since about 1980, with one sharp drop in 2017 when the College Board introduced a revamped SAT. But then, unlike everybody else, Asians rebounded vigorously in 2018, perhaps owing to test-prep consultants cracking the code of how to beat the new SAT on their second try.

“Nobody knows for sure why Asian scores have outpaced the field like Secretariat in the 1973 Belmont.”

In contrast, white scores peaked about a decade and a half ago, declined gradually, and then have plummeted since 2017, with 2020 seeing an 11-point drop, versus only 6 points for Asians.

No doubt, the pandemic school shutdowns, which caused the total number of SAT takers to decline a few percent versus the 2019 school year, had some kind of an effect, but what is uncertain.

Also, the College Board has been persuading more states to pay for all students to be tested, so white test-takers are up 23 percent since 2016 versus 14 percent for Asians. But that just suggests that Asians were voluntarily scraping the bottom of their barrel harder than whites were in the past.

(By the way, the horrendous drop in American Indian scores is likely related to the number of test takers almost doubling, although my sense is that Native Americans are not doing well in general. But nobody much cares about them in an era when far more concern is devoted to more talkative groups.)

Interestingly, the once-moderate advantage held by boys over girls in average scores has nearly vanished. In 2000, boys scored 38 points higher than girls, but by 2020 the sex gap was down to only 7 points.

By the way, the much-talked-about “Another/No Response” gender identity only amounted to 0.1 percent of self-identifying seniors. They scored 84 points below average: Perhaps teen victims of Rapid Onset Transgenderism tend to be not that bright?

But on the PSAT given to ninth and tenth graders, 0.4 percent self-identified as “Another/No Response,” suggesting that either the gender delusion is getting worse among younger cohorts or, more optimistically, that it tends to resolve itself after adolescence.

Why are scores among whites and males plummeting? Are the declining scores among our society’s designated villains—white males—engineered by the College Board to reduce an embarrassing disparity? Or are whites and males responding to their denigration in their own schools by turning against education?

What about legalized marijuana?

Similarly, nobody knows for sure why Asian scores have outpaced the field like Secretariat in the 1973 Belmont. (One minor methodological reason is that the small, not terribly high-scoring Pacific Islander group was previously lumped in with Asians, so separating them in the stats boosted Asian scores slightly a number of years ago.)

Selective immigration clearly matters. For example, Chinese-Americans in California when I was young tended to have surnames such as Wong and be descended from transcontinental railroad laborers and the like. Today they tend to have names like Wang and be descended from grad students. (It’s the opposite of Armenian-Americans, among whom the descendants of early-20th-century immigrants have names ending in “-ian” and are highly respectable, while the new Armenian-Americans who grew up in the Soviet Union have names ending in “-yan” and can be a handful.)

Presumably, Asian Tiger Mothering and test prep have important effects. Many observers cling to old studies from decades ago showing limited benefits to studying for the SAT, but I can’t recall ever anyone testing the 1,000+ hours that Asian-American students regularly put in these days.

And what about cheating? We know there is much cheating in East Asia, so why not in the U.S. as well?

It would be extremely useful for experts to figure out just how real the Asian-white gap is and how large it is likely going to get. But nobody seems to have the courage to take on an issue that is so “racially charged,” as they say just before they cancel your career.

Not surprisingly, the Asian-white gap is more severe on the right hand of the bell curve: 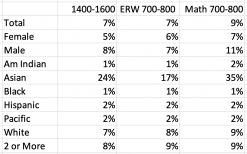 Only 7 percent of whites score between 1400 and a perfect 1600 compared with 24 percent of Asians.

On the math half of the SAT, as the old stereotypes predict, Asians do even better, with 35 percent scoring 700 to 800 versus 9 percent of whites. But even on the verbal side (which has been renamed Evidence-Based Reading & Writing), 17 percent of Asians score at least 700 versus 8 percent of whites.

Of course, the Asian-black gaps are immense, with only 1 percent of blacks scoring 1400 or above. There are about 20 high-scoring Asians for every high-scoring black, and this ratio will only go up as Asians continue to immigrate. Asians scored 290 points higher on average than did blacks. The average Asian score would rank in the top 10 percent of blacks.

The American Establishment is currently going through another of its periodic frenzies about the crucial need to hire all those talented, hardworking African-Americans who, theory says, must be currently sitting around unrecognized.

But all the objective evidence suggests that there aren’t enough high-IQ African-Americans to meet the demands of American elites looking to boost their Diversity Inclusion Equity numbers, especially in lower-paying fields such as mathematics and architecture. If you are a black who scored 800 on the SAT math test, recruiters from Goldman Sachs and Google will be excited to talk with you. But once the apex predators of the economy have met their quotas for very smart blacks, there won’t be many left over for the Dunder Mifflins to choose from.

Hence, there will be intensified pressure from corporate America for more immigration by African elites to fill affirmative-action slots. That may work somewhat, although how it benefits African-Americans is unclear. But in Nigeria, the fertility of educated Igbos and the like is well below that of the fundamentalist Islamic masses in the backwards north.

In summary, what we need is a national push to investigate what’s happening with testing and how to reform it to prevent abuse.

The problem is that any objective analysis would open up huge cans of worms about racial differences in test scores.

For example, the University of California regents recently commissioned a blue-ribbon panel of UC faculty to investigate the usefulness of SAT scores in college admissions. The experts reported back that testing was hugely useful in identifying high-potential college students, even more so than high school grade point average.

But then the regents canceled the use of the SAT/ACT tests anyway, and hilariously proclaimed that in five years the University of California will have invented its own test on which blacks and Hispanics don’t score lower.

Good luck with that.