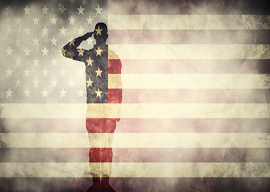 Reagan later believed putting those Marines in Lebanon, where 241 were massacred, to be the worst mistake of his presidency.

Military intervention for reasons of ideology or nation building is not an Eisenhower or Nixon or Reagan tradition. It is not a Republican tradition. It is a Bush II-neocon deformity, an aberration that proved disastrous for the United States and the Middle East.

The New York Times headline declared that Trump’s speech was full of “Paradoxes,” adding, “Calls to Fortify Military and to Use It Less.”

But isn’t that what Reagan did? Conduct the greatest military buildup since Ike, then, from a position of strength, negotiate with Moscow a radical reduction in nuclear arms?

“We’re getting out of the nation-building business,” says Trump.

“The nation-state remains the true foundation for happiness and harmony.” No more surrenders of sovereignty on the altars of “globalism.”

Is that not a definition of a patriotism that too many among our arrogant elites believe belongs to yesterday?