Attack of the Killer Handbags 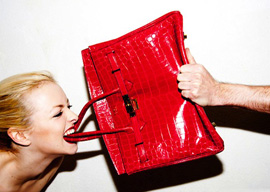 “Yes,” says Jennifer Larkin of Coach, a luxury handbag provider, “the infatuation with handbags started around the late 90s/early millennium for that very reason. Women wanted something that would last longer.” She claims that women were sick of spending all their disposable income on clothes that go out of fashion in a season. They wanted a luxury brand that would last without “coughing up a lung.”

I get that, but women don’t want just one bag. They want a different bag for every outfit. And these prices are mental. Coach bags seem fairly reasonable at around $350, but the designer bags most women “need” for their collection go for thousands. The Birkin bag is the Holy Grail of women’s handbags and is priced anywhere from $6,000 to $203,150. It sends chills through my Scottish bones to know that if I gave my wife a Birkin she would worship me for the rest of my life. I like sneakers but if someone bought me a $10,000 pair, I’d punch them in the face.

That’s what’s so confusing. Women are spending all their money on something men don’t even know exists. I thought fashion was about attracting the male bird, but I’m about as attracted to a leather bag as I am to a scrotum. Shoes are neck and neck with handbags as far as industry dominance goes, but I totally get shoes. I wouldn’t even look at a woman in platform flip-flops or sport sandals, but I’d happily shag Rosie O’Donnell if she was in a pair of five-inch Louboutins.

As I screamed this at Doonan he shrugged his shoulders and suggested I look up Freud. I believe he was referring to Sigmund’s theory that a purse is a vagina. In an era where we all refuse to age gracefully, maybe women need to be seen with a perpetually new, clean, and incredibly valuable vagina. They aren’t trying to attract men with their $1,500 labia. They’re saying to other women, “I’m not old.”

Call me old-fashioned, but I long for the day when a woman was more interested in being a pretty version of herself than being another person entirely. Plastic surgery and silicone breasts don’t make you look young; they make you look phony. Fashion and getting dressed up should be about being attractive to men, not competing with other women. Freud shouldn’t be part of this equation and it shouldn’t costs thousands of dollars. Just grow your hair long, put on some affordable high heels, and stuff your shit in any old satchel. I want to go out on a date with you and when we get back home, I want to fuck you. It’s that simple.