Autumn of the Game 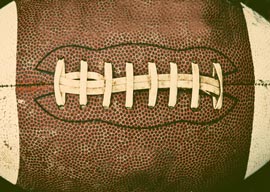 September means football, in high school, in prep school, and, of course, where it all began, in college. There is nothing that evokes F. Scott Fitzgerald times more than a crisp autumn Saturday afternoon, a marching band, a campus full of beautiful coeds, and stands full of rowdy Joe Colleges rooting for their alma mater. And then, of course, there are also Sunday afternoons, when the big boys take over. I used to love pro football and follow it when people like Kyle Rote, Sam Huff, “Broadway” Joe Namath, and the recently deceased Frank Gifford played it. No longer. Somewhere along the way the game changed from a sport to a combat one, with gorilla-like behemoths standing over a fallen opponent and pumping their chests. Those golden afternoons on Yale Bowl, with student athletes tackling low and even helping an opponent stand up after a tackle, are long gone. Along with single wings and dropkicks. And sportsmanship.

Never mind. Sport follows life, and life has become brutal, money-minded, and mannerless. Why should sport be any different? In fact, sport reflects life, as does Hollywood, with its car chases and violence. And those who should know better are just as bad. Buffalo Bills coach Rex Ryan claimed an animal by the name of IK Enemkpali the day after the wild beast was released by the Jets for sucker punching a teammate in the locker room and breaking his jaw. Instead of being banned for most of his useless life, the guy will most likely get a raise. Rex Ryan is to leading by example what Bernie Madoff was to honest stock trading. But again, never mind. Pro football has turned into a freak show, with headhunters being paid millions to cripple their opponents. Which brings me to what a columnist by the name of Joe Nocera calls the real NFL scandal.

“Sport follows life, and life has become brutal, money-minded, and mannerless. Why should sport be any different?”

It’s about the league’s refusal to pay out billions to concussed ex-players who eventually suffer from chronic traumatic encephalopathy, or CTE. Nocera means well, but he’s wrong. Let’s take it from the top: One of the reasons ex-stars like Frank Gifford were articulate until the end was that back in the good old days people tackled, they didn”t spear with their helmet. Tackling is hard to do. I remember my first day at lower school football at Lawrenceville the coach ordered us to tackle hard but low. That was 65 years ago, I admit, but the game was invented as a sport, not a spearing contest over whose brain will explode first, the spearer or the speared, as happens to be the case today. When the players union sues the NFL because it failed to properly investigate, report, and revise league rules to minimize the risk of concussion, I think of the hooker who cried rape. After the check bounced. One of the reasons I quit boxing and went into martial arts was that even at 20 and boxing at the University of Virginia with 14-ounce gloves, I could feel light-headed for days after a match. I have yet to hear of a boxer who sued because he became punch-drunk, which most boxers end up being.

Be that as it may, a federal district judge approved a settlement of the lawsuit: one billion smackers or so in the hands of former players who are suffering from dementia and other brain diseases. Some 200 veterans, however, have opted out and hope to bring their own lawsuits against the league. (Ambulance-chasing lawyers are having a field day.) Now, it’s hard for anyone without a heart of stone to root for the league against the players, and I”m not. (My heart is extremely soft and has been broken so many times by the fairer sex, there is no way I”d choose those fat little men who never played football when in their teens but, after having screwed their fellow man and become billionaires, now own football teams. The Mara family excepted.) And yet. Smokers who have repeatedly been warned against the habit and get cancer are prone to sue, as are people who drink. I do both, and if the big C gets me, the last thing I will do is sue the tobacco companies and those who make liquor. I”m a grown-up, after all, although there are those who dispute the fact. The NFL actually is not liable for the athletes who have contacted CTE. Football is a rough sport and athletes go in it with their eyes open. If the league is liable, so is Uncle Sam for the close to a million soldiers and tens of millions who have been injured since the inception of the Republic. I suffer from terrible arthritic pains from years of judo, karate, and tennis. Should I sue the various tournaments that I”ve competed in for my pains? At times I can hardly get up in the morning. Should I ring Epstein, Epstein & Goldfarb and sue? What the hell is going on here? Football is not tiddlywinks. As Confucius said, “He who tackles with head first has his brains scrambled.”