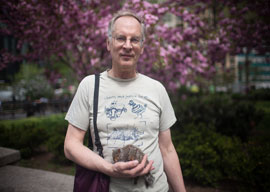 Goetz drew his gun and moments later, all four black youths lie bloodied on the subway car floor. One, Darrell Cabey, was paralyzed for life.

Unfortunately, Shatner seems obsessed with unraveling the mechanics of firing off a certain number of shots in a particular number of seconds. This leaves little time to talk about the truly fascinating aspect of the case: the support the supposedly “racist” Goetz received from New York’s black community.

Now mostly forgotten, unless you’ve read Ann Coulter’s book Mugged, are statements made by the criminals’ neighbors, many of whom told The New York Times that “the four teen-agers were troublemakers and probably got what they deserved.”

“If I’d had a gun, I would have shot him,” not one but two neighbors said to the Washington Post.

[Y]ou get no sympathy from us peace-loving, law-abiding blacks. We will even contribute to support the guy who taught you a lesson, every way we can….P.S. I hope your wheelchair has a flat tire.

In the end, a mixed-race jury acquitted Goetz of twelve of his thirteen charges, only finding him guilty of possessing an unlicensed firearm.

Fast-forward to 2010 and Aftermath. I was impressed by how sensible and (more or less) normal Goetz appeared while chatting with Shatner.

Right up until the minute he mentioned the squirrel.

Goetz, you see, admitted to being unlucky in love. However, he told a nakedly bowled-over Shatner that he’d made one true friend: a baby squirrel he’d found abandoned in the park and had nursed back to health.

So when Goetz’s name returned to the headlines, my first thought was, Maybe the squirrel ran away.

Goetz was arrested this week for misdemeanor pot possession and sale, having made what sounds like a fumbled pass at a female undercover cop.

(Although in fairness, at least it wasn’t something like, “Let me violate your Prime Directive, baby.”)

It’s fun to joke that at least he wasn’t found carrying a 32-oz. Mountain Dew and to think that thanks in ironic part to Goetz and Giuliani, the NYPD can now focus its considerable resources on such trivial pursuits.

Reached for comment by the New York Post, Goetz was eager to make one thing clear. No, he had certainly not been high on that fateful 1984 night.

“[T]o perform as good as that, with shooting, I don’t think you can do it stoned,” he said.
“Mostly, though,” the Post continued, “he wanted to talk about squirrels.”

“There is a black squirrel that I rescued many months ago who wound up leaving me,” Goetz told them.

Usually nothing makes me happier than being right. This time? Not so much.