Back on With Their Heads, Please 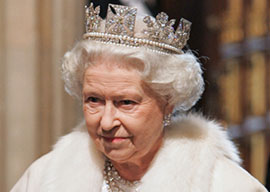 The Queen of England announced she was “absolutely delighted.” The Prince of Wales issued a statement saying he, too, was “delighted.” Prime Minister David Cameron said the engagement marked “a great day” for England.

Excuse me? Hello! What are they talking about? These folks are all either stark raving mad or big fat liars.

Sure, Kate Middleton may be the best thing that ever happened to Prince William. She might become a fine wife and mother. Waity Katie may even perform her duties better than any princess before her. But Kate Middleton”we”ll have to call her Catherine from now on”is not to the manner born. The Windsors could not have hoped William would marry outside his class. They don”t. Even if they say they do.

The trouble is, Diana almost brought down the monarchy. The Queen and Prince Charles probably figure a young woman such as Catherine will be concerned with appearances. She will do what she’s told rather than what she desires. Apparently she does already. Catherine certainly won”t embarrass the Windsors the way Diana did. Only someone secure with her background or as headstrong as Diana was would break with royal protocol.

“If she plays her cards right, which she probably will, Miss Middleton won”t end up a casualty like Diana.”

On the bright side, their children might not be too ugly. Years of inbreeding does little for appearances. Kate comes from a good-looking family. Both her parents and siblings are quite attractive. They seem like solid stock, too. But are the Middletons happy about the union? Unless they are big social climbers, the marriage will actually make their lives unpleasant. They”ll have a lot of new friends hoping to get some sort of fancy invitation. Their privacy will be limited and their actions scrutinized. Just for that, I hope William is grateful to have Catherine in his life. In addition to everything else, I imagine being his wife could be a wee bit dull. I”m sure he still gets a good laugh pushing his pals into swimming pools and the like. The poor boy, bless him, was probably broken by his upbringing. He can”t be completely normal. His father, while very nice, seems totally unemotional. His mother, as we all know by now, was a bit bonkers. And her tragic death must have been hard on William. He comes off like a typical English bore: a bit damaged and emotionally awkward.