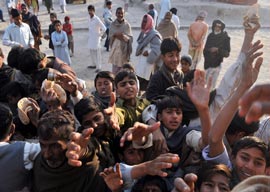 We live, as I have noted before, in a beggars” democracy:

This refers to the more relaxed sort of despotism in which the lower orders”the beggars”are permitted some modest freedoms of expression, so long as they do not challenge the basic assumptions of the state ideology too boldly.

There is no chance that any of us beggars out on the dissident right will have the chance to publicly quiz the 2016 presidential hopefuls.

We can dream, though. If I could ask the hopefuls 20 questions each, here is what I would ask them, by policy categories. I have restricted my list to questions an actual candidate might in fact answer.

There is no attempt here to be comprehensive. I”m asking about issues that interest me. If trade, fiscal policy, or global warming is your thing, make your own list. The chance for your list to be presented to any candidate is no worse than for mine. Welcome to the beggars” democracy!

Illegal immigration.  Of all the problems currently being aired in the political sphere, this seems the easiest one to solve.

Would you have a problem supporting any of those measures? If so, why?

“Should not Muslim refugees be resettled in Muslim nations to minimize culture shock?”

How many guest worker programs does the U.S. currently operate? (That is: How many of our current visa categories permit a foreigner to work in the U.S., but confer no right of permanent settlement?) Is this number too few, too many, or just right?

It has been suggested that chain migration (i.e. settlement visas for relatives of citizens and permanent residents) should be restricted to the spouse and minor children. Do you agree?

Should employers be allowed to hire foreign guest workers into job categories for which there is no evidence of a shortage of native workers? (Evidence such as five consecutive years of rapidly rising labor rates.)

Over 13 percent of our population is foreign-born, the highest proportion since the early 1920s. Legislation of that time (1921, 1924) brought immigration down to very low levels for 40 years, allowing the Great Wave immigrants to assimilate. Do you think it is time for another move to much lower levels of immigration?

Refugees, general.  The U.S. refugee resettlement program seems to be wildly out of control. A handful of points at random from the latest fact sheet at Refugee Resettlement Watch, keyed to section numbers in that fact sheet:

(4) The U.N., not the U.S., selects most of the refugees for settlement here, so that (given subsequent chain migration of family members) “the U.N. is effectively dictating much of U.S. immigration policy.”

(10) Congress has not, for at least 25 years, questioned the refugee quota proposed by the administration. By law, Congress is supposed to consent to the annual quota.

(22, 25) The refugee resettlement program is addled with profiteering and fraud.

Would your administration initiate an overhaul of the refugee resettlement program?

In the early 90s the percentage of Muslim refugees was near 0; by 2000 the program was 44% Muslim. The Muslim component decreased after 9/11, but today is back up to about 40% and is set to rise from here.

There are 49 majority-Muslim nations in the world, two of them wealthier than the U.S.A. Should not Muslim refugees be resettled in Muslim nations to minimize culture shock?

Other National Question issues.  Which of the following do you favor for Puerto Rico?

Nuclear proliferation.  Pakistan, a dysfunctional kleptocracy maggoty with Muslim fanatics, has for nigh on 20 years had nuclear weapons, and now has missiles with which to deliver them.