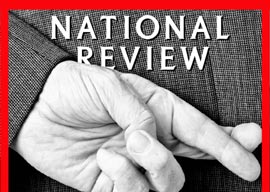 (Although, notably, that piece didn”t appear in National Review itself.)

However, as I wrote after his death, neither am I one of those who practically worships National Review founder William F. Buckley, for there is obviously no reason to do so.

Yes, he wrote (and more particularly, uttered) some delightful things, but a fine prose style is, inconveniently, a poor measure of personal sanctity.

Naturally, Steorts” semi-stealth attempt to disguise National Review as a back number of The Advocate prompted not a few folks to look back fondly at Buckley’s famous on-air bitch-slapping of Gore Vidal:

And indeed, one can”t help but wonder what Buckley would think of Steorts” essay.

But unremarked upon were the 2013 claims made by two of Vidal’s younger relatives that the lauded liberal author was a pedophile “ and that a file supposedly detailing his predilections had been maintained by… William F. Buckley.

Who apparently declined to share this information with the authorities.

Alas, we may never learn the whole story, because:

“Buckley’s son, Christopher, has said that while clearing out his late father’s study, he found a file labeled “Vidal Legal”, which he threw into a dumpster.”

It’s tempting to wonder if Steorts has a similar type of file in his possession. Otherwise, his continued employment at National Review remains the biggest mystery of all.