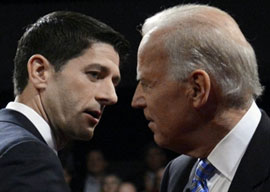 To Biden’s credit, he even nailed Ryan on a few factual matters. Although a self-proclaimed Zionist who apparently knows the Secret Jew Hand Gesture, he ably swept aside Ryan’s suggestion that Iran was only a twinkling of an eye away from having fully functional nuclear weapons. When Ryan spoke against Obama’s stimulus, Biden said he had two personal letters Ryan had written him requesting stimulus money. But beyond such aberrations, Biden dominated the debate mainly by acting like an impudent boor.

Ryan’s giant failure was that for someone who aspires to be a heartbeat away from the presidency, he couldn’t even handle a raging buffoon such as Biden. Paul Ryan unmasked himself as someone made of flimsy plywood rather than presidential timber. He simply rolled over like a whipped puppy and allowed Biden to take him straight to the Jerk Store.

Republican spin doctors have attempted to portray Ryan’s abject passivity as coolness under pressure, but it was the coolness of a corpse. He was tentative, cautious, sincere, polite, and earnest, all of which worked against him. He was conciliatory even as Biden kept jabbing him with a pitchfork. As the debate started, he blew a giant opportunity by tiptoeing gingerly around the Benghazi cover-up. He looked even worse when he appeared to suggest that another war in the Middle East might be preferable to allowing Iran’s mullahs to get their mitts on a nuke or two. He sidestepped the moderator’s direct request for him to be specific about how he plans to pay for across-the-board tax cuts. Worst of all, Ryan displayed none of the youthful passion that was expected of him. Instead, Biden was the passionate one, even if it was due to senility rather than youth.

Polls conducted immediately after the debate yielded conflicting results. A CNN survey declared Ryan the winner, 48 percent to 44 percent. CNBC gave it to Ryan by a 20-point margin. But CBS gave it to Biden by 19 points.

Throughout the debate, mention was made of the fact that Biden and Ryan are both Irish Catholics. But while Biden acted like a drunken leprechaun, Ryan behaved like a chastened altar boy. And though Biden’s problem may have been that he acted too Irish, Ryan’s fatal flaw was that he didn’t act nearly Irish enough.