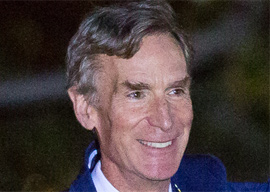 See the difference there?

Any alleged “scientist” who claims that his main goal is to “save the world” has forfeited his right to be called a scientist. Same principle applies for journalists. If your goal is to uncover anything but the unvarnished truth”no matter where the truth may take you or how brutally it may undermine your ideological leanings”then you are starting off with answers rather than questions and have corrupted the entire process.

Take, for example, the ideologically loaded but intellectually vacant term of “climate change denier.” Also flung against Holocaust and vaccine skeptics, the term “denier” itself is a grossly dishonest construction”it implies that the “denier” agrees with the accuser but is lying about it. It starts from a premise of bad faith and eliminates the possibility that someone might simply disagree”or even have sincere questions.

Most dangerously for any true devotees of intellectual inquiry and the scientific method, it declares unequivocally that the matter is forever settled. Merely daring to question certain aspects of the Holocaust is illegal in 16 European countries. It is frequently suggested that parents who refuse to vaccinate their kids should also be jailed. And Bill Nye has publicly toyed with the idea of jailing climate change skeptics. He recently told Tucker Carlson that there is to be no more questioning over whether “climate change””which was called “global cooling“ in the 1970s and then “global warming” until the embarrassing fact was revealed that average global temperatures stopped rising in 1997“is real and that humans are the primary cause of it:

There is no such thing as “settled science.” That itself is an unscientific notion. There is always a possibility that key variables haven”t been considered and that new information could lead to entirely different conclusions. And if you think that people who disagree with you should be jailed, you are not a scientist, you”re a totalitarian.

Unlike the majority of people”who seem to allow their ideology to automatically form their opinions for them”I don”t have an opinion on the massively complicated topic of anthropogenic climate change because I readily admit I am not even remotely well-informed enough on the matter to venture an opinion without feeling like a moron about it. I will note that the Climategate controversy of 2009 made me slightly skeptical of the zealotry of those who”d wish to jail anyone that challenges the party line about it. And the mantra that 97% of scientists agree with the party line”a quotient bandied about by committed globalists such as Barack Obama and John Kerry“has been thoroughly eviscerated because it was based on a single flawed study that included even the “deniers” as part of the 97%.

The fact that over 31,000 scientists have signed a petition saying that humans aren’t causing global warming should cast at least a tinge of honest doubt about whether the matter is “settled.” So should Al Gore’s prediction that the North Pole’s ice cap would disappear by 2013, when the fact is that it has increased significantly in size since 2012. So should the fact that a hearty 95% of global-warming models have proved to be wrong.

Beyond all that, I will note that everyone I”ve ever seen who aggressively pushes the idea that man-made climate change will rapidly destroy the earth also insists that we”ll need a global governmental mechanism with a centralized taxing authority to combat it. In this case, I”m not talking about 97%”I”m talking about all of them. Therefore, it doesn”t seem entirely wackadoodle to me if I question whether global finance is using “climate change” as a ruse to consolidate global power.

In the words of former UN climate official Ottmar Edenhofer:

So try as I may, I cannot yet disentangle climate-change zealotry from statist fanaticism.

But Bill Nye Saves the World strays far afield of climate change into topics that are entirely ideological and speculative, yet are still framed as entirely “scientific.”

In an entirely barf-worthy dance routine called “Sex Junk,” Nye has actress Rachel Bloom thrusting her chubby rump around in an attempt to dismiss the notion of sexual dimorphism, which was almost universally accepted as scientific until, oh, about three weeks ago. In the fourth season of Bill Nye The Science Guy, Nye himself committed the hate crime of alleging that there are two genders and that they are determined by whether one is born with XX or XY chromosomes. Apparently at some point, Nye became a trans-scientist.