Birth of an Unbiased Media 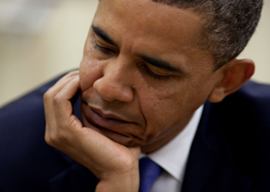 After September 11th happened, Graydon Carter famously quipped, “I think it’s the end of the age of irony.” After Romney slayed Obama last week, I unfamously quipped, “Liberal bias in the media is dead,” which marked the official end of journalists kissing the president’s ass.

We’ve already seen Bill Maher say things such as, “I gave Obama $1 million and from the looks of the debate, he spent it on weed!” and “Obama sure is smart, but I’m not sure if I’m gonna take his class next semester.” Soon Maher is going to form his opinions based on sources other than the Democrats’ talking points.

Back in 2008 we had a press corps that was clearly in the tank for Obama. They pooh-poohed Obama’s ties to Reverend Wright and focused instead on the cost of Sarah Palin’s wardrobe. CNN reporters didn’t merely report on the campaign, they went door-to-door campaigning for Obama. In the past, the ombudsmen of both The New York Times and the Washington Post complained that their own papers were biased. But in this new age of a truly ethical media, there will barely be anything to ombud.

“We are at the dawning of a new era. The age of liberal media is over and an epoch of truth has begun.”

This time around they are going to openly discuss the video of Obama claiming that rich people are only against violence when it’s not their fault. They are going to debate Obama’s controversial notion that racism affected the rescue efforts after Hurricane Katrina. MSNBC is going to do a huge feature on Obama talking about America’s 37 million victims of poverty, then they’re going to show a huge graph that clearly depicts the nine million he has piled on top of that number. The economy is no longer off the news table, and an in-depth analysis of what this administration has done to the unemployment rate is about to hit prime time.

It’s not only the economy that will be scrutinized. Now that liberal bias is dead, we are finally going to start hearing about the attacks in Libya and the disgusting cover-up Obama perpetrated in its wake. Fox will no longer be the only ones asking why an ambassador’s murder and a consulate’s bombing begets an apology such as “The future must not belong to those who slander the prophet of Islam.”

Rachel Maddow and Chris Matthews will use words such as “shame” and “liar” to discuss their ex-boyfriend Obama. We will start hearing words such as “warmonger.” All the broken promises about closing Guantanamo and bringing the troops home will get thrown back in the president’s face.

Fast and Furious is going to go from a buried footnote to a massive scandal that gets a word with “-gate” attached to the end of it. We are going to hear all about Eric Holder’s history with guns and how he used them to commit raids back when he was a revolutionary activist. The new, improved, honest media is going to tell us exactly how many innocent Mexicans this debacle has killed. We’re going to see all kinds of maps showing us how far this carnage has spread beyond Mexico.