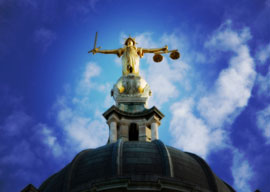 Still, there are some instances where capital punishment exceeds the bounds of plain morality. The case of George Stinney, the youngest person to be executed in 20th century America, is one such event. Stinney’s death was heart-twisting enough to force anyone to reconsider the efficacy of government execution. At age 14, he was accused and convicted of murdering two preteen girls. Being a black boy accused of murdering two white girls in the segregated South, the verdict rendered remains questionable, even to this day. Stinney’s siblings still believe his confession was forced. A court heard evidence questioning the fairness of the original trial back in January, and it’s expected the whole affair will be found incongruent with basic standards of jurisprudence.

But that’s not the worst part of Stinney’s tragic death. According to Wikipedia, on the fateful day of his execution, “Stinney walked to the execution chamber with a Bible under his arm, which he later used as a booster seat in the electric chair.” After receiving the first surge of electricity, his face mask fell off, “revealing his wide-open, tearful eyes and saliva coming from his mouth.” Two more jolts of electricity later, he was pronounced dead.

A 14-year-old boy met his end on an electric chair under dubious circumstances. Surely, some lesson should be taken away from this event. When the weakest among us are abused, it cries for careful consideration. Some attribute Stinney’s execution to racial prejudice, including Atlantic writer Ta-Nehisi Coates. The charge has legitimacy, and it goes to the root of government-sanctioned punishment. We all have biases, some moral and some not. Regardless of how straight our moral compass points, it will always be less than perfect. As Coates writes, “it is worth asking whether our legal system should be in the business of doling out an ultimate punishment, one for which there can never be any correction.” Certainly there are people who should pay for their crimes. But how far can a society go in punishing criminals before our morality is sapped completely away?

Like Lewis, I believe wholeheartedly that, “to be punished, however severely, because we have deserved it, because we “ought to have known better”, is to be treated as a human person made in God’s image.” But just as we are endowed with reason and free will, we are also flawed. Our human nature is a gift with strings attached. We should always be cautious of what we think we know, and that includes the guilt of our fellow man.

I used to find it hard to disagree with execution as a means of acquiring justice, but instances like the Stinney case bring misgivings. Given the sheer amount of power held by certain governments”namely in the United States”it now seems quite foolish to allow bureaucrats the authority to take lives. That doesn”t mean lethal force should be barred from use in defense of property or family. It’s only a call for caution, a caution that could very well save innocent lives.

The humanitarian approach of today doesn”t focus much on government power or the nature of justice. It’s mainly concerned with deterrence formulated by state-approved technocrats. The death penalty is occasionally cited as a preventative measure to stop heinous acts from being committed in the first place. There isn”t much evidence to support the proposition, but it’s also the wrong way of viewing the issue. If capital punishment is legitimate, it’s only legitimate based on the criteria of justice. It’s not some plaything to be used in societal engineering.

On the death penalty, I largely find myself in the company of National Review‘s Ramesh Ponnuru. My aversion to capital punishment has nothing to do with the truth that some people are evil and are unlikely to repent. We shouldn”t allow government to use its power to take the life of a criminal “because we don’t have to do it,” as Ponnuru says; we have other options. I can”t speak for everyone, and I can”t begin to fathom the misery and anger that come when a loved one is murdered. But this much I know. Forgiveness is a stronger act than vengeance. If that’s apostasy of common sense, so be it.