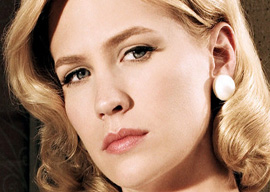 Poor Simon Cowell has bigger problems than his V-neck shirts and lousy attitude. A stalker broke into his London house last weekend after smashing a brick through a window while Cowell watched television. Not surprisingly, Simon was terrified. Cowell has been the victim of security lapses in the past; his car was bugged in 2008.

Khloe Kardashian has called off her association with PETA ever since an aggressive activist flour-bombed her sister Kim at Kim’s perfume launch. Khloe says the bullying tactics are a no-no and she wants nothing to do with the organization for whom she posed nude. They treated Kim unethically, which doesn’t necessarily mean Kim’s an animal.

There was scandal at the Winter Music Conference in Miami last week when Madonna asked a crowd if they had met Molly, an apparent reference to Ecstasy. Some DJ who was probably only trying to get his name in the paper was up in arms about the remark because, well, because drugs are illegal. I thought it was pretty cool of Madonna, if that’s even what she meant, because she doesn’t seem to leave the gym long enough to take an Ecstasy tablet or dip that dirty tongue of hers into a bag of crystals. The most genuinely offensive thing at the conference was the hideous bathing suit Paris Hilton was wearing. Why, God, why?

The best always comes last, and I got the biggest chuckle this week from my favorite Jersey girl Nicole “Snooki” Polizzi and her fiancÃ© Jionni LaValle, who were spotted carrying around a plastic baby in preparation for their impending parenthood. Then again, Snooki’s had so much plastic surgery, maybe it’s her actual baby.