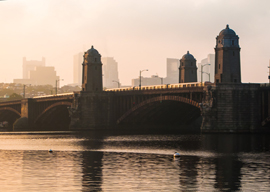 To a white person, the absolute pinnacle of fitness is to run a marathon. Not to win, just to run. White people will train for months….They will then set goals like running in the Boston Marathon….

Where’s the irony in that? Well, check out item No. 7 in Landers’s book: “Diversity.”

To be fair, though, Landers adds some qualification to No. 7:

White people love ethnic diversity, but only as it relates to restaurants.

Since neither of the Tsarnaev brothers, nor any of their family members, is a restaurateur, possibly this one doesn”t count. It does sort of tie in with the location of the bombings, though.

Irony. The bombings occurred in zip code 02116. Not knowing the first thing about Boston, I shall have to rely on the stats in city-data.com (which is sometimes out of date). Whaddawe got?

And this is of course Massachusetts. Zip code 02116 is in congressional district 8, which went for Obama 58-41 last November. That’s Barack Obama, the guy whose political career was launched in the living room of terrorist bombers Bill Ayers and Bernardine Dohrn. There’s your irony.

Mind you, that 58-41 for the district is a tad less than Massachusetts overall, which went 61-38 for Obama. Why? Probably because of Euro-ethnic Reagan Democrats. I see 13 percent of persons in zip 02116 declare their first ancestry as Irish.

Irony. Irish-Americans, along with a cast of characters that included Colonel Gaddafi, Yasser Arafat, and the KGB, were keen supporters and financiers of the 1966-1999 terror-bombing campaign by the so-called Irish Republican Army (a name insulting to the Irish Republic, which has a perfectly good professional army not involved in terrorism).

The most authoritative account of that campaign lists the IRA and its affiliates as responsible for 636 civilian deaths (Table 20), though it does not tell us how many were caused by bombs in public places. For an on-the-spot account of what such bombings meant, I recommend”though only for those with strong stomachs”Kevin Myers’s Watching the Door, which I reviewed here.

As an Englishman living in the USA during the mid-1970s peak of those killings, I knew from other expats which bars to avoid when I didn”t feel like being insulted or socked on the jaw. There were places where well-nigh any bar was out of bounds: New York’s Woodside, Rockaway, and North Bronx, and anywhere in central Boston. Those were the places where Noraid raised most of their funds. Don”t be spendin” it on bandages, now!