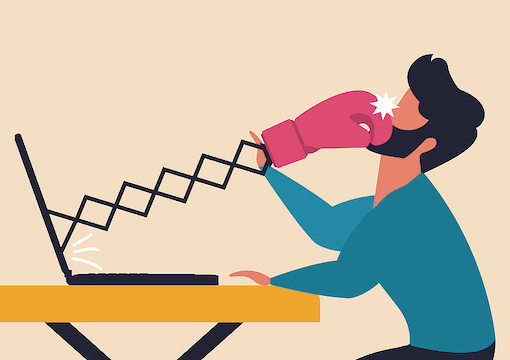 Lost in the hysterical drama over Elon Musk buying Twitter is the fact that Twitter and the internet in general were doing fine until fairly recently. Up until somewhere in the Obama years, no one was concerned about internet culture. If anything, people lauded the open culture of the internet as an antidote to the limits of real life. The internet was going to be a better public square than the old public square.

Many of the people weeping over Musk promising to reopen the platform originally embraced Twitter so they could break free from the limits placed on public discourse by corporate media. Most of the complaining, however, is coming from the sorts of people the internet used to exclude. Online culture used to be a haven from the scolds and busybodies who haunt daily life.

The fact is, social media is not a new thing. It is just a new label. From the earliest days of the internet, there have been public platforms. In the days when only smart people were online, it was the BBS. This was a crude sort of digital bulletin board. Imagine a character-based 4chan and you have the idea. Then it was Usenet and then message boards that provided platforms for online communities.

“The fight to preserve speech online is a microcosm of the larger war to rescue civic life from the worst people in society.”

It was only in the past decade that what we think of as social media came online and made it easy for the left side of the bell curve to join the fun. This is when the sorts of people who seek to regulate speech came barging into internet culture, telling everyone else the internet was broken. It is the technically inept latecomers who have made these internet platforms into ideological war zones.

This is where Musk can not only fix Twitter but set an example for other platforms when it comes to managing the scolds and busybodies. Fixing online culture is primarily about who, not how. A lesson from the early days of online communities is that the rules need to be about selecting against the scolds and busybodies. Make the platform less appealing to them and you quickly reduce their numbers and their victims.

This is a lesson from the meatspace. In daily life, no one likes the woman who is always creating drama. People organize their lives to limit their exposure to that person and anyone who enjoys her drama. Further, the guy who keeps talking about Hitler or how much he hates the left gets ignored. They keep this stuff to themselves so they can be included in the community. Social pressure works.

That would be the first way for Musk and the rest of the public platforms to discourage the sorts of behavior that are at the root of the problem. Removing all of the mechanism to report other users takes away the appeal to the scolds and busybodies. If they are stripped of their ability to rat out fellow users, most of the fun of the platform goes away for them, as well as the people who enjoy taunting them.

Similarly, down-voting is a powerful weapon against troublemakers. No one likes to be told they are the problem. It is why booing at public events remains popular. It works, and the down vote works the same way. The reason YouTube removed down-voting is they hated being booed by their own user base. Social pressure is the best way to compel conformity in a community, digital or analog.

Message board communities figured this out long ago. These systems give users reputation scores based on the up votes and down votes. Inevitably, “Nazi guy” and “progressive gal” destroy each other’s reputation so that everyone else can conveniently ignore them. In other words, the people who are always the problem are allowed to marginalize themselves. Twitter could easily do the same.

Another lesson from the golden age of the internet is that the sorts of people who want to be moderators are the people who should never be moderators. It is the scolds and busybodies who lust for these positions. The Trust and Safety committee of Twitter is composed of the worst, most petty despots humanity can produce. The platform would improve greatly if Musk just threw these people off the roof of the building.

A $50 billion tech company should be able to replace these harpies with software to enforce a minimal number of clear rules. A searchable database of banned words and topics would make the rules clear, and the software engineers should have little difficulty coding those into the regulatory system. The culture inside the company improves because the scolds and busybodies have been removed.

There are other things that can be done, like allowing people to buy extra privileges on the platform, but the goal should always be to select against the scolds and busybodies who make life miserable for everyone. A reorienting of the moral hierarchy that places these people at the bottom, rather than the top, not only fixes Twitter, but sets a positive example for the rest of the public platforms.

It also could spill into the real world. When groups like the ADL and SPLC can no longer weaponize their weirdos and misfits to harass people online, their position as the tone police quickly erodes. When these sorts of people are remarginalized online, they will start to be remarginalized in real life. Public discourse needs to be fumigated to remove these vermin from the public square.

The fight to preserve speech online is a microcosm of the larger war to rescue civic life from the worst people in society. As we see with Twitter, when you empower maladapted weirdos they quickly invert the social hierarchy, placing the deviants at the top and normal people at the bottom. This inverted moral universe inside Twitter is what is killing it, but it is also what is killing civic life in general. Musk has a chance to set the tone for reversing this and maybe restore some decency to public life.