Calling All American Nazis (Is This Mic On?) 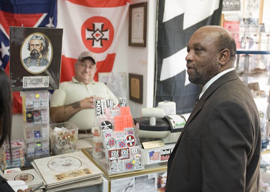 Where are all these American Nazis the news keeps warning us about? When Nancy Pelosi’s daughter was starting out as a reporter for NBC, she told me they had her go undercover and join the KKK. I managed to convince her to show me some of the footage she had secretly recorded, and I almost died of boredom. All she did was sit around, listen to lonely people bitch about their lives, and then go back to her bunk and worry. NBC ended up feeling just as bored and after putting her life in jeopardy for several weeks, they decided to throw the story in the garbage (though I love the idea that the Speaker of the House’s daughter is technically still a KKK member).

Alexandra Pelosi’s experience was not unique. I was recently developing a show for BBC America with Louis Theroux’s old producer. I suggested we try to find some white-power gangs in London. “At first, I love that idea as much as the next guy,” he told me sighing, “but we’ve tried to do this before and the same thing always happens—nothing. Gangs are hard to find and when you finally do get ahold of them, you’re left with some incredibly dull lifestyles. The white gangs drink, the black gangs get high, and they both watch TV all day.”

Newsweek recently had a feature called “My Life as a White Supremacist” that was almost as boring as the KKK store in South Carolina. The FBI informant who’s quoted throughout the piece gave few examples of anything consequential outside of “They would take you out and have you shot.” They didn’t—but they probably “would.” Newsweek ignored the lack of scoop and chose to go off on a tangent about this imaginary “resurgence.” The author even went so far as to claim, “the nation’s first black president [has] swelled the ranks of extremist groups.”

What has actually swelled is the definition of “extremist.” Mark Steyn recently noted that the American government has saddled us with a debt amounting to “more money than anyone has ever owed anybody ever.” In the American left’s mind, if you have a problem with that, there’s a Hitler costume hanging in your closet.

It all reminds me of the debacle back in 1989 when Morton Downey Jr. attacked himself in an airport bathroom, drew a backwards swastika on his face, and claimed he had been attacked by skinheads. America wants there to be a disturbing increase in white-power terrorists so badly, they close their eyes, click their heels, and make it so. Real-life terrorists such as the ones who want to blow themselves up for Allah are just too, I don’t know, real.

Remember when Iowa bureaucrats wanted to do an anti-terrorism drill and chose to dress actors up as Nazi skinheads so as not to offend Muslims? Skinheads decided they could be offended too and protested until the drill was shut down. A reader called “formergr” left a very telling comment about the story on Gawker:

Is it sad that I’m somewhat heartened that at least this town’s terrorism drill centers around the somewhat more realistic threat of a white pride group/domestic terrorism, rather than the Scary Furrin Muslins? [sic]

Yeah it’s sad, you fool. Timothy McVeigh killed 168 people. September 11th killed around 3,000. If you want to go international on the numbers, you’ll end up with lone white nuts such as Anders Behring Breivik killing 77 people versus Muslim terrorists killing, I don’t know, a bajillion? Besides, both McVeigh and Breivik disavowed racism.

Look, I wish there was a spooky resurgence of Nazi skinheads. I fought the tiny handful that existed in the 80s when they were at their peak, and it was as exhilarating as it was terrifying. I’m too old to repeat that particular lifestyle, but I still love documenting the bizarre. Unfortunately, the demand for colorful bad guys—or, actually, very pale bad guys—simply does not meet the supply, and the growing resurgence of American white-power groups is what it’s always been: a dying myth that somehow refuses to die.