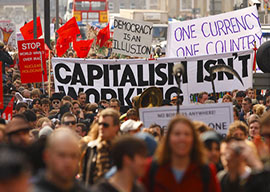 This weekend, The New York Times reported on affluent Nassau County on Long Island: “Now, with its bonds suddenly downgraded and a state oversight agency preparing to seize its checkbook and credit cards, Nassau is on the verge of a full-fledged fiscal crisis.”

California, Illinois, New Jersey and New York are facing historic deficits, as the stimulus money that enabled them to survive 2009 and 2010 runs out.

Illinois is facing a shortfall of $15 billion, a third of the state budget. California is being compared to Spain. A default by either could do to the credit rating of states what a default by Italy or Spain would do to the European Monetary Union.

Now the U.S. government is moving again in a direction opposite of where the people voted to go on Nov. 2.

The deficit is not shrinking, but growing. Even before the Barack Obama tax compromise—price tag $857 billion—the 2011 deficit is surging.

Spending is approaching 200 percent of revenue.

Obama’s deficit for the first quarter of 2011 alone will be the same size as the largest annual deficit George W. Bush ever ran. Michael Fereli of JPMorgan Chase projects the 2011 deficit at $1.5 trillion, after $1.4 trillion in 2009 and $1.3 trillion in 2010.

And the bond markets are flashing warning signals.

After Obama’s tax deal was announced, U.S. government bond prices tanked. Some folks are getting out to get into stocks. Others think U.S. bonds just became a riskier investment.

U.S. cities and states and the U.S. government, as well as the governments of Europe, are facing a crisis of confidence. Can their elected politicians reassure investors who bought their bonds in good faith that those bonds are still worth what they cost?

Or should bondholders bail out before they are burned?

We may be entering a crisis of democratic capitalism.